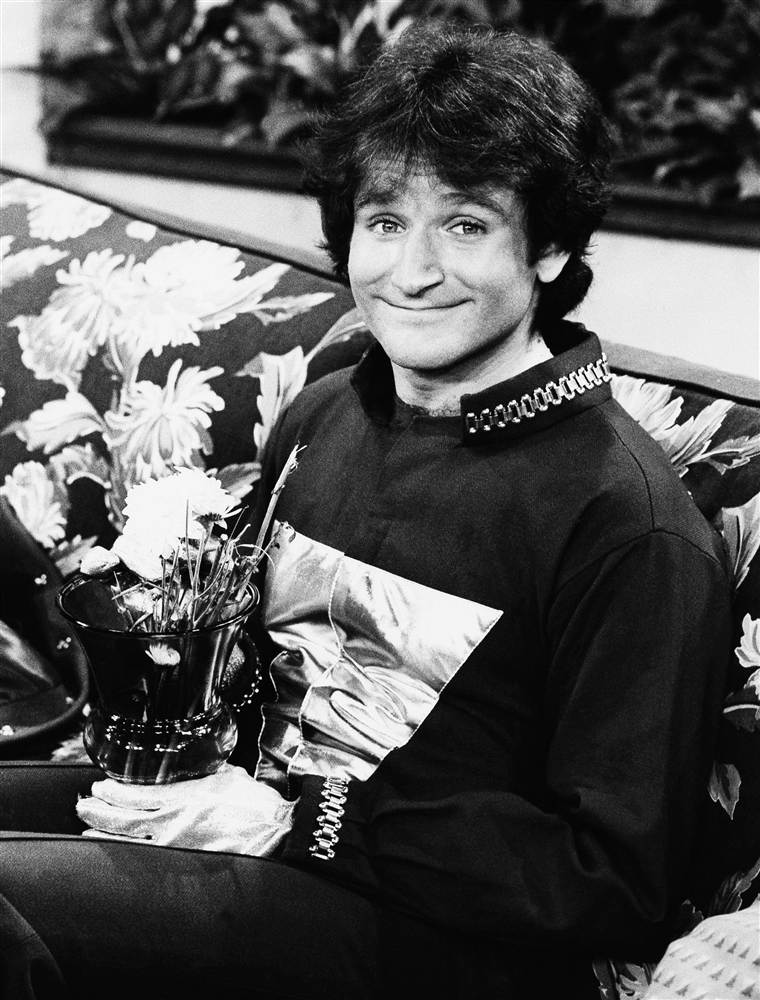 Robin Williams as Mork from Ork

I have not posted for a while as I have been ill. Yes fighting a bad cold and it has made me want to curl up and not get out of bed, but I am soldiering on. However I was moved to write this about my beloved childhood actor that I just adored and still do.

I grew up with Robin Williams. I watched him on Happy Days, then, Mork and Mindy and of course in all his films and anything that he was in I would race off and see. I was even lucky to get tickets so that hubby and I could see him when he came to Sydney a couple of years back. I was so keen to see him no matter how much it cost. I idolised him and thought him wonderful as a kid. I still do even as an adult.

I was driving back from the kid’s school on Tuesday (12th August) morning and on the news it told me that he had died. NO! NO! NO! He cannot be dead. It cannot be true! But it was. How sad! How Horrible! Has the world gone mad??? This cannot be right? But it was! It was true and it was real! I was in tears and have been for a while every time I think about how magical he was and what a talent he possessed.

I cannot begin to imagine the pain and upset his family and close friends are going through, it must be horrible. I never knew him but I hoped to one day meet him. Yes it sounds strange but I had this belief that one day I would meet him. This will never be now, but I am grateful that I got the chance to see him live and experience what it is like to see my childhood favourite actor live.

There has been much outpouring of grief and upset on learning of the passing of Robin. I am not the only one that stars off in disbelief at the idea that this has happened. It is not what I expected would happen. I did know that he struggled with depression. If only he could see the world sending their love to him and honouring him for who is was and his work. What a pity he is not here to see how much he was adored.

My girls wondered why I was upset. I told them that a much loved actor who I adored had died. They were upset to learn who he was as they loved his films also. They think he is the man that invented Flubber. I did have to explain. The twins still think he is connected to Flubber! I now have sourced some copies of Mork and Mindy and now the kids are addicted as much as I was at their age.  I have kids who want to drink with their finger, sit on their heads and both are now saying Nanu-Nanu and Shazbot! A job well done I say.

Not only have we lost Robin Williams we also mourned the loss of Lauren Bacall. Yes it has been a very sad week indeed.

Many articles are coming to light saying that Robin did not want to do movies as they drain him too much. This in turn does not help the depression. I had no idea. I knew that he got very involved in his characters and of course that would be draining but did not think that he would get terribly depressed afterwards. Also these articles are pointing to money troubles and concerns and that could have led to the depression. I just want to put it out there: You will never ever know why someone did something. I don’t want to assume anything as it is not my place. Just because he is a public figure does not mean that we can analyse every last detail of his life.

I have also been upset to learn of horrible people sending terrible images and taunts to Robin’s daughter Zelda. How awful, and disgusting of this trash to do this to someone who is grieving for her father. I am so sorry Zelda that is has happened and I hope these kids or losers get their accounts removed permanently. Why can’t people just leave others alone in times like this? Respect people! If only Robin knew about this I am sure he would have done something to make the rotters pay! Karma is a bitch and I hope it catches up with them.

We need to respect his family and just honour who he was as a person. I had no idea that Robin gave all the money from his stand up throughout New Zealand to the government so that they could rebuild Christchurch after the earthquakes. What a lovely thing to do. What a generous and loving thing to do!  Williams also helped his good mate Christopher Reeve out after his accident. What a great friend.

I would like to thank you Robin Williams for lighting up my life, making me laugh and being a lovely person that everyone in the world wanted to be. Thanks so much. I am sorry you are not here anymore and I hope that you are in a better place.

Love your number one fan. Suzanne.

Katy Perry Makes It All Better

When is it Fully Dark?