Normal smells that don’t annoy me are causing all sorts of dramas. Hubby put on his aftershave and it made me sneeze for hours afterwards. I have now told him to do it elsewhere as I find the smell over powers the bedroom and surrounds. This then means that I have constant sneezing and upset for hours.

I usually take a pill of Loratadine which I have called Lorraine and it fixes up the hay fever. 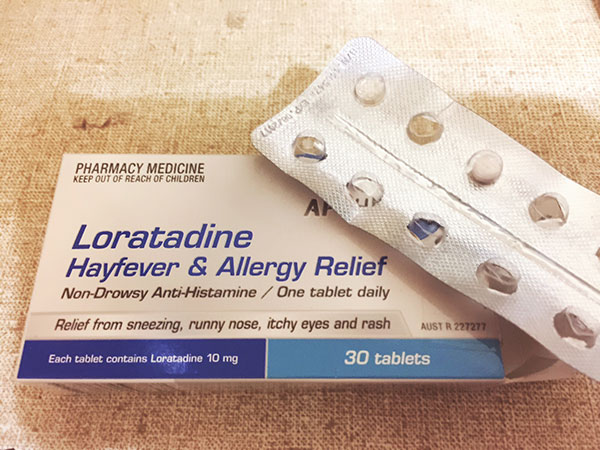 Loratadine or Lorraine as I like to call it. I have nicknamed this hay fever medicine to make it easier to remember.

Now you might be wondering why I have called the pill Lorraine? Well, I could never remember the official name and just called it part of what I remembered. So it has always been Lorraine to me.

I know it is not correct and a bit weird but I’m sure I’m not the only one that does this. Do you have odd or weird names for things that you use all the time? Do others think it is odd as well? What are the names you have given to everyday items?

I told her I could never remember it and decided that Lorraine sounded better. She thought this was brilliant. I hope that my phone call brightened up her day, at the very least it was different. In the end I was able to take this medicine during pregnancy and it worked a treat. However it is not doing its normal magic and making my hay fever go away.

Normally 1 pill does the trick. No sneezing, no itchy eyes and no need to have a constant supply of tissues, hankies and the like.

I did think that maybe I had a cold and also hay fever. Maybe that is why it was not working as well as before. I tried some cold and flu tablets but that did not help. OH how annoying!

One last ditch effort was to get the sinus and hay fever tablets from the chemist. They seem to help more. Some days are better than others but it seems to be an especially bad season for hay fever so far.

I just hope that it gets better and I don’t have a whole summer feeling like this. I hang for summer and the hot weather. I don’t want to be forever head in a tissue and having a bad time.

Have you been suffering from hay fever lately? Do your remedies work to make you feel better? If you take any medicine what are the ones that work for you? Oh and if you have a nick name for your pills like I have please share.

Hire A Box to Help Your Next Move

When is it Fully Dark?