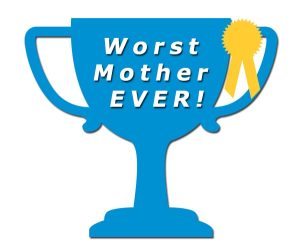 A couple of days ago one of the girls wanted to take her handbag full with toys and many other trinkets. I explained that the teachers would make her put it in her locker and she will not be able to play with it. If she did play with it, there is a great possibility that whatever she has in this handbag she will lose or other kids will play with and of course lose. I then told her that this would upset her and the best idea was for us to keep the handbag with her toys at home so that after school she can come home and play with it.

This idea was met with anger and annoyance. I got yelled at, screamed and cried at. Not a good start to trying to get out of the house to drop the twins to pre-school. I finally managed to remove the handbag from this child and move her towards the door. However this was helped by me blocking her access back to the house and making sure to close the door so we could finally get to the car.

This in turn made her lose it like I did not know what the last angry upset was all about. She tried to bite me, scratch me and just was plain angry. I explained that I did not want her to lose her toys and it was best they stay at home and to hurry up and get into the car as we are now running late for school. She decided a temper tantrum was in order and decided to yell at the top of her lungs, “I want my toys, I want my handbag” and then the one I never expected to hear or at least when they were older. “I want you dead!”

I had her sister in her seat belt and she was just sitting there being good as she had witnessed her sister being naughty and she was the good girl and sister, and showing mummy how well she was to make sure she was in the good books. I then walked up to the offending child and said, “What did you say?” She then muttered some things that no one could understand and finally she repeated, “I want you dead!”, I then explained that I am sure she does not want me dead and I understand she is very angry however, she would be very upset if I did die. I explained that there would be no one to take care of her or her sister. She then fired back very quickly that daddy will do it and they will be fine without me.

I explained that daddy has to work to earn money to put food on the table and to pay for the house, he would have to hire a nanny or get family to come help him. She was very quick to realize that she did not like this idea. I told her that I love her very much but not the way she was acting. Has this happened to you? Your lovely little baby fires back such hateful things at you? She has since apologized and told me that she loves me.

Now it was the other ones turn. She was not listening or coming to get dressed after about 10 times of me calling her name while I was waiting in her bedroom with the clothes ready for her to get dressed. I gave up and went and got her, put her under an arm and got her to the bedroom and showed her the clothes and started getting her dressed. She screamed and told me “You are the worst mummy, I will never play with you again!”

Both girls were mucking up and not going to bed. I heard noises that I thought meant that they were out of the bedroom. I told them to get back into their room, still hearing the noise I got up and walked to their bedroom. They were in their room and I was told they were playing and it was the noise from the bedroom I had heard. I apologized to the girls and then one of them yells out, “It’s o.k mummy we still love you!” Nice to know. 🙂

I think it is just the age the twins are at, but it is a stressful time and it makes me think that maybe they are not far off being teenagers? They seem to be doing all the same things, however they are just younger. I suppose it is just different tantrums and a different age, and more stress just dealing with different worries. What are your thoughts?

Not this dinner mummy!!!