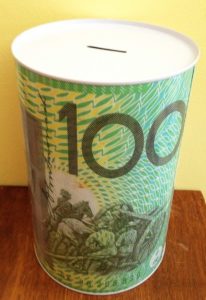 Think the coins will come in handy!

I for one would love to have heaps of money in my superannuation account, but alas due to the GFC and also looking after kids this is not be so. Hopefully it is just for now, and the bank account will rise in the future. I for one have been listening with interest about the call to tax higher income earners for their super, but it appears that the lower income earners are not having it easy either.

I do understand that taxing the rich more is sensible but I for one have never understood why our money that we are saving for our old age is taxed so heavily. Why can’t we just save this money with little tax threat, or maybe none at all? The more you can squirrel away the better, and the less you would rely on government pensions. I for one think that if you make saving for your retirement harder it ruins what you are trying to achieve. What about you?

My personal opinion is that you should not be taxed on any of it, and it should be able to provide for your old age. People are living longer and things in life are much more expensive. Grown up children are staying longer and longer with their parents, so adding to the costs of older parents who by this stage might not be working and only relying on their super for income.

I also found this line incredible in Peter Martin’s article today in the Sydney Morning Herald, see below:

Why are we setting out differences between male and female earnings?  Why are we still making the distinction that men have a different wage compared to women? What would be the average middle earner wage for women? Where is this scale? I hope that I have not earned a female wage ever, just a wage. I don’t want to be treated differently due to gender. I would like to be just paid accordingly to my skills and ability. Maybe if I was paid a male wage my superannuation figures might look healthier? Who knows? People would never admit to giving you less money for being female. Interesting line in the article don’t you think? What are your thoughts?

If you are like me and your eyes glaze over when all intricate details of superannuation is discussed, this page from Wikipedia about Taxation on Superannuation might be of assistance.

I would make the rate that everyone pays the same for superannuation, as the more you put in only helps the individual and takes the stress away from the government to provide. So they are doing themselves an injustice to stop us saving more money.

Teaching Kids about Tax and Superannuation