Would you weight lift while pregnant? I don’t know if I could have. Pregnant with twins made things ten times harder to do. Even normal things, like open a jar. Maybe that was my form of weightlifting? Weightlifting was not even the thing I thought about. Mind you I am no athlete or gym junkie.

Lea-Ann Ellison has posted a picture of her lifting weights while eight and half months pregnant on her Facebook page. This image has created a big outrage and upset. Lee-Ann is a female bodybuilder and this pregnancy is her third s 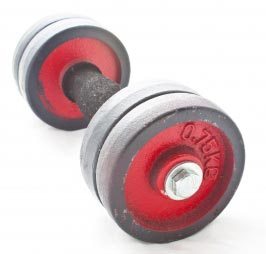 Weights, not as big as what Lea-Ann Ellison was lifting. Image courtesy of artemisphoto at FreeDigitalPhotos.net

o she does know what she is doing and in for.

I can understand the concern but believe that if you are super fit as Ellison is, she can do more than I could when I was pregnant.  I am sure she takes care and rests when she needs to, but if CrossFit training is part of your make up that is what you live and breathe. How can you just give it up?  I do understand some of you would say, “You are pregnant, take a break!” I do agree as I was very tired so I took lots of breaks when pregnant, but I am not a super fit athlete.

The concern from doctors is due to heavy lifting there is a chance that you can sever the placenta, go into early labour, or even have a miscarriage. I would hate for that to happen and can understand that is why doctors say to not lift things that are too heavy and to take it easy.

However in an Essential Baby article that discusses this issue, it mentions that “There is evidence that weight-bearing exercise can reduce the length of labour but experts stress that women should avoid activities that could result in potential trauma to the foetus.”

I do think she looks amazing for a woman pregnant with her third child and I was very worried to hear that she is lifting heavy weights while very pregnant. Although I wonder if I was more athletic how better would have I handled the labour? Would it have taken 30 hours or more? Or was that just a twin thing or a first pregnancy?

The shock of this picture posted by Ellison is not due to wanting to exercise during pregnancy but with what she is doing, very heavy weights. I would not do this when pregnant as I would not want anything to go wrong. I’m not saying it will, but you never know, and if it does you would always blame yourself.

Would you weight lift when pregnant? I did do some hand held weights and some other things in the

The Power Of Lavender

Reading With Kids Has A Big Impact