Today the pest man came to make the yard wasp free and of course rid of evil scary looking spiders. It started well, but then it was the search for the invaders nest. They must have known that their minutes were numbered as their nest was so hard to find. The poor man spent ages looking and looking, while more and more wasps circled him and tired to attack him. They are vicious things! I must say while this was happening I kept a watchful eye just in case he did get hurt. The girls and I were watching from the kitchen window. I thought the kids might be interested to see what he did and the fact that soon we would have our garden back.

This simple removal exercise to find the nest did not go well, hours went by and he still could not find it. I finally told him that I don’t care about the Agapanthus or the plants around the area (well one tree I do but it was not near the scene so that was good for it) and told him to just chop them off or start digging. We need to de-wasp and fast! We had not been out in the yard since the incident with Julia it was just not safe. So could not do the washing as I did not want to get attacked either.

Finally the lovely pest man found the nest and it was in an old tree trunk, and I must say that the nest looks nasty and very ugly. So you have been warned. One thing that is of concern is that he mentioned that from the size of the nest it had been there a while. We had never noticed wasps before so it is very strange that they have decided to come out now. Could it be the warmer weather? Or some other reason. 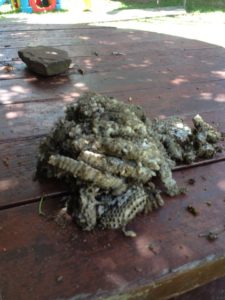 So the pest man was very happy as he found the nest and I asked what would have happened if the nest was not found. He told me that they always find the nest and he was not going to leave until he did. Good news and even better that it all worked out. He sprayed everything again and removed the nest so all is good. There were a few wasps flying around and I hope that they would be gone soon.

I took the kids to the park so they could run around wasp free and once we came home there seemed to be none around, maybe tomorrow there will be no indication that we had wasps at all?

I must say that this was a big drama and we did not need the expense, but who can have wasps in the garden threatening your every move. It is just the right time to be out and about this long weekend with one less pest in the garden, well maybe more as spiders are gone as well. I just wish that it would help with the mozzies and an annoying possum.

Have you had battles with wasps or hard to find pests? What have you done to fix things? Did you manage to do it yourself or did you get hired help? Share your stories of what happened.

share
2Comments
hard to find the nest, no more wasps