Last Thursday (16th of January 2020) I took Alexander to see the stage show of “The Snail and The Whale”, the show ended on the 21st of January. 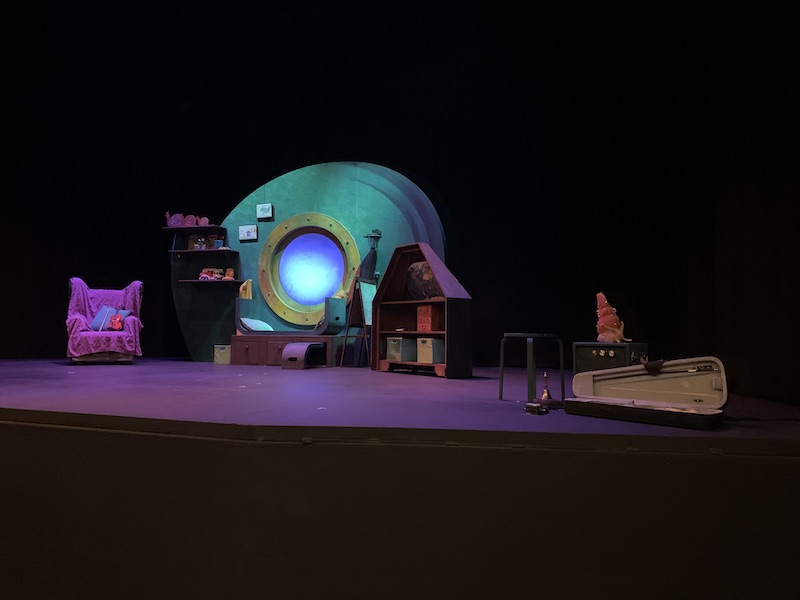 The stage for the show The Snail and The Whale at the Opera House.

I wanted to expose Alexander to more theatre and something that would be just for him and not his sisters.

I purchased the tickets and then decided to get the book of the Snail and the Whale by Julia Donaldson and Axel Scheffler. It is an award-winning picture book, and like the rest of their work, it is fun and has wonderful pictures. 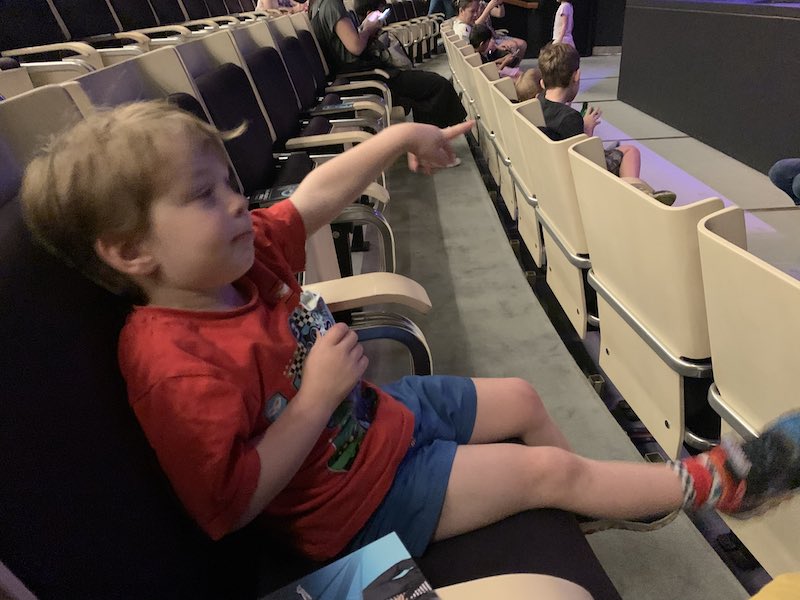 Alexander told me that there is a fire truck on stage.. not a real one, it was a toy. Alexander loves fire trucks.

Alexander takes a while to warm up to new books and when I originally got him Julia Donaldson and Axel Scheffler’s Stick Man he took a year for him to become interested and then obsessed with Stick Man, and this followed with the Gruffalo, Zog the Flying Doctors and I thought it would continue with The Snail and the Whale.

The book of the Snail and the Whale was given to Alexander for his Christmas present and he was interested but lost interest after about 2-3 pages. I read it to him nightly and we managed to the end a few times. I thought I was winning as Alexander didn’t know that he was going to see the stage show of the same book.

I had no idea what the show would be like, but thought it might follow the book. It did, but with the injection of Father and Daughter characters that told the story of the snail and the whale.

The snail was represented by a stuffed toy and also some wooden models, and the whale creativity came into being after the cast maneuvered the bed, bookcase, and armchair to create the whale.

There were a few times where they wanted audience participation and some pantomime fun too. The kids were busy yelling, screaming and laughing about where the daughter was hiding and to great glee pointing out where she was hiding to the Dad.

I think that this show was just the right length for my little boy, however, there were moments that Alexander seemed more taken with his seat and straddling the armrests like he was a gymnast and balancing on the top of the seat before it gets put down. (these are the seats that rise up if you are not sitting on them. He thought this was rather entertaining. 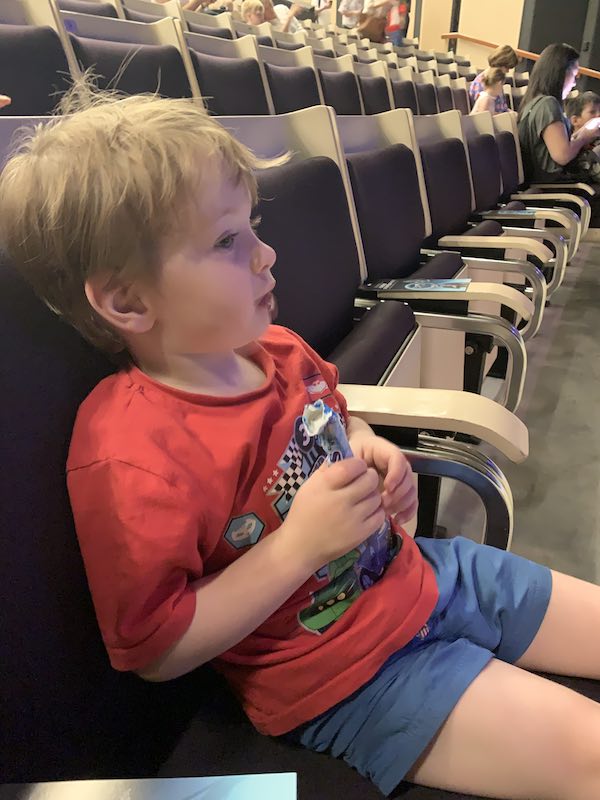 Alexander waiting for the show to start. We were getting excited to see The Snail and The Whale.

For my little boy, he loved the action and the fun of the kids yelling to the actors, and some of the story. However, I think he is a little young to take in the story, it needs to be more action-packed for my little person.

I did note that other kids of similar ages sat very well and were not doing tricks on their chairs like mine was.   Maybe it was his age, maybe it is just getting used to the theatre or needing to have a show that is more action-packed for my little boy that he was a little bit fidgety. I am not sure…. but I think it was a good experience for him to be there. 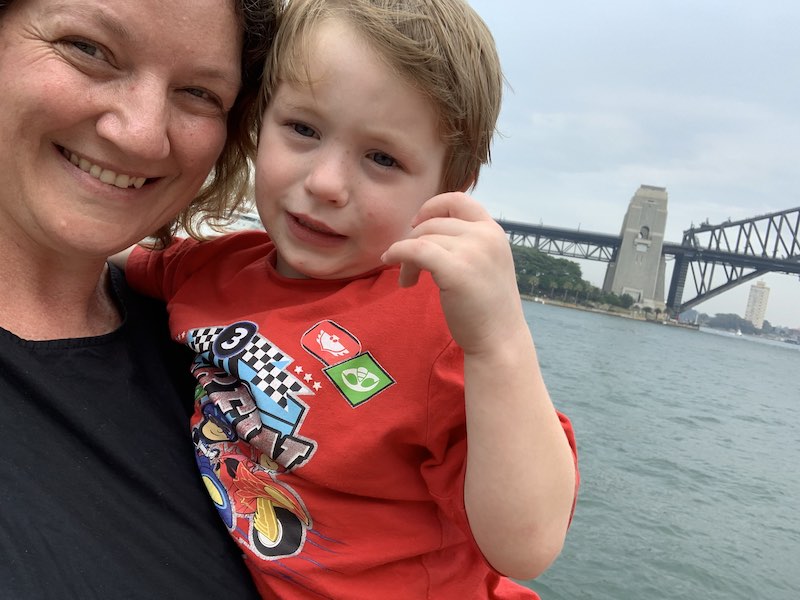 Mummy and Alexander enjoying the harbour

So what did I think?
I thought that the way they brought the story to the stage was interesting with the inclusion of the Father and Daughter characters, but for little kids maybe it was too much dialogue. I know it is based on the book and the words and some parts were directly taken from the Snail and the Whale, however maybe for future it could be more visual and action-packed.

I liked how the cast involved the audience with some dancing and games, and of course when the kids were yelling at the cast about where each person was extremely fun (Alexander loved this and couldn’t stop laughing and smiling at me during this section of the show).

Before the show, Alexander and I had a drink and a bite to eat at the Opera Bar. He had honey toast and bacon, while I had a coffee and some toast. 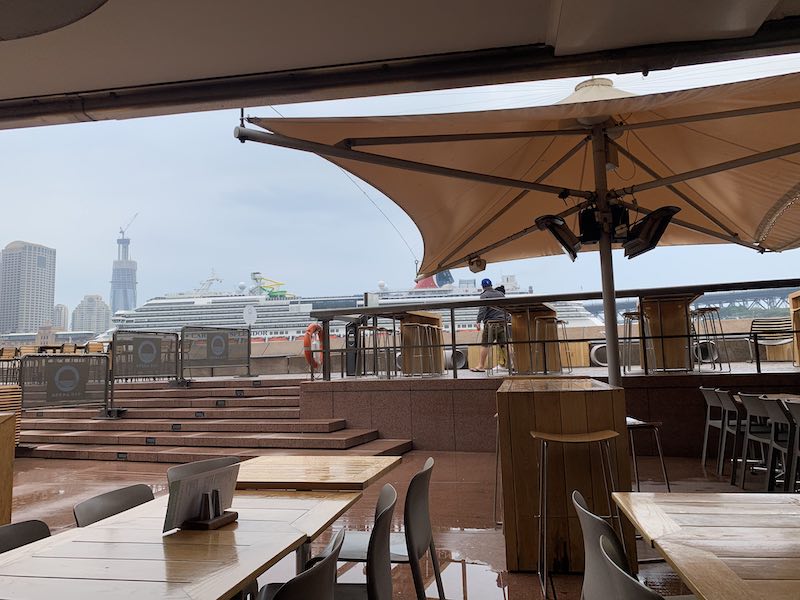 Relaxing at the Opera Bar, Sydney.

Alexander was very happy after food, if he doesn’t’ eat regularly he is a very grumpy person. Having a happy and fed kid before a show at the Opera House was key. 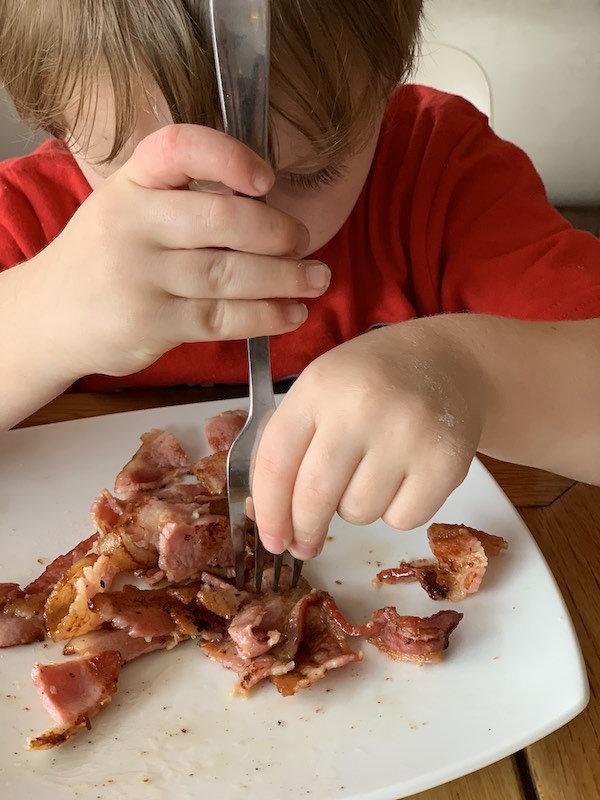 Enjoying some bacon before the show at the Opera Bar, Opera House, Sydney.

While we were eating at the Opera Bar, Alexander noticed the water slide on the top of a cruise ship that was in the harbour. He was super excited about it. He then told me, “Mumma after the show we are going on the slide” 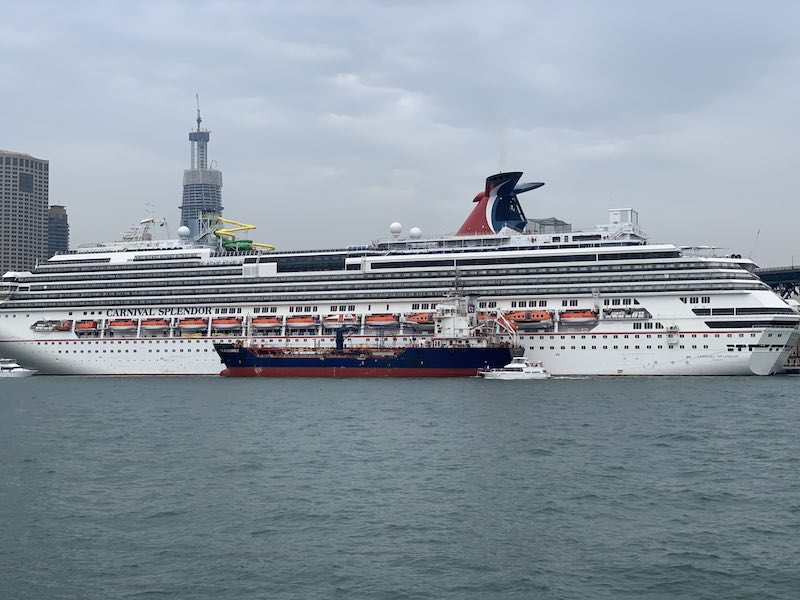 The cruise ship that Alexander wanted to go on. Geez, I just got tickets to a show at the Opera House and now this kid wants to go on a cruise.

I then tried to explain that we cannot go on this water slide. He said, “We can Mumma!”  I said that only people that paid to go on the big cruise ship can go on this slide, and said that maybe one day we can go on a cruise and then we can play on the slide. 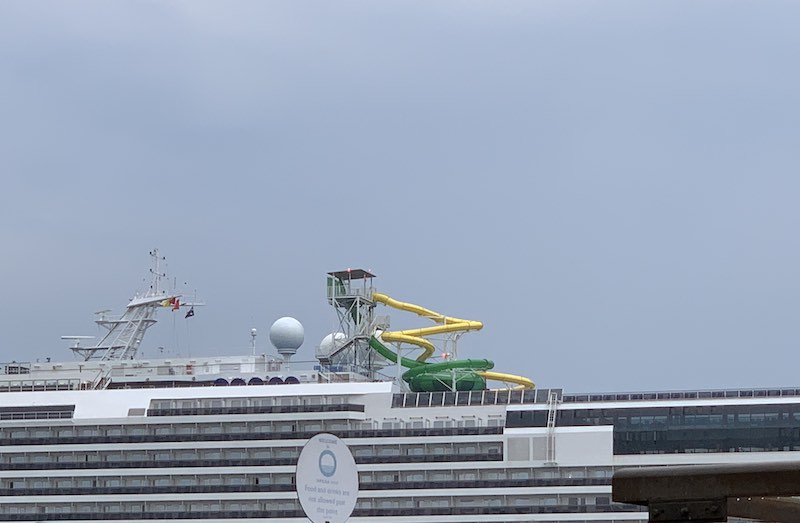 The slide Alexander wanted to go on..however, it was on a cruise ship and we were not passengers.

After seeing The Snail and the Whale there was some free play at the Opera House. There were heaps of pool noodles with connectors for kids to push and to attach into wooden holes. Alexander loved this. He spent ages connecting noodles together and even moved things together to attach different groups together. 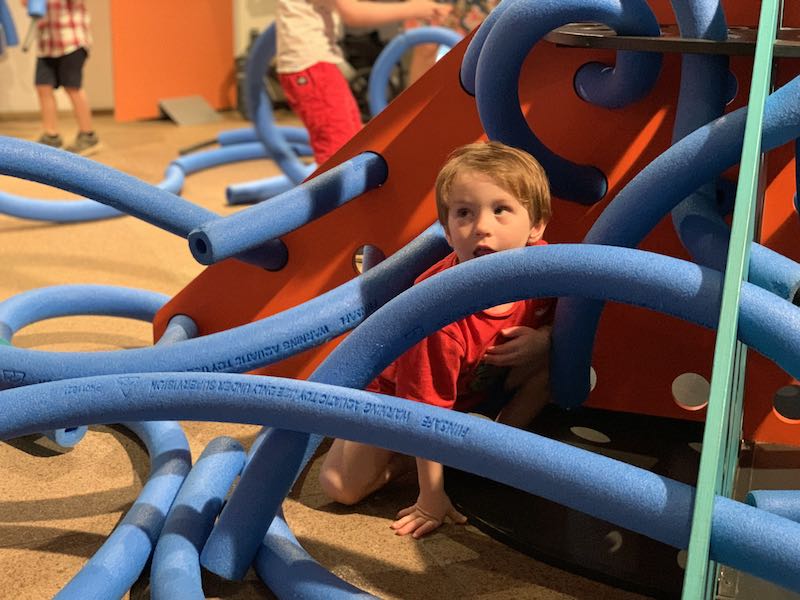 I think Alexander loved his time in the city and I hope that he enjoyed his theatre experience.