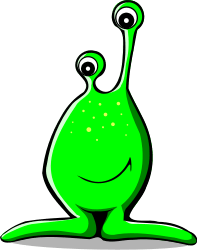 Today we have learnt that it was not the girls being messy it was the aliens. I am not sure when they have visited us and where they are hiding, but Lillian has confirmed it was indeed aliens and not herself or Julia that is responsible for the mess.

When daddy was in their room asking for the girls to tidy it up, Lillian turns away and put her head on an angle. Daddy said it was very mysterious the way she did it, and then she told him about the aliens.
He lost it and just had to laugh.

I asked Lillian about why she was not helping clean up a mess that she helped create, and she quite seriously told me that it was not her that did it, it was the aliens. I asked her when they arrived, and what they looked like. She told me that they were green, and by this stage Julia was in on telling me that they were green and trying to describe them, mainly I just know that they are green, naughty and messy.

Having this ability to have a great imagination is I believe a great asset and a tool that can help you in your line of work, writing, acting, or just having a fun. I do hope that the girls never lose the ability to have fun and to have a make believe world.

Is it due to Lillian having a vivid imagination about outer space? Or just a very active imagination for a three year old? She was calm and serious in telling me about these naughty visitors and the goings ons.  Or is she just trying to shift the blame? Would mummy and daddy believe there really was someone else responsible for the mess and chaos? I think she hopes so.

Has your child got a vivid imagination? Do they make up wonderful stories, and if so what are some of them that have made you laugh and think how clever the story and detail was. Send in your comments.