On the last weekend of the spring school holidays I took the family for a sleepover. A sleepover with a twist; we went glamping on Cockatoo Island. 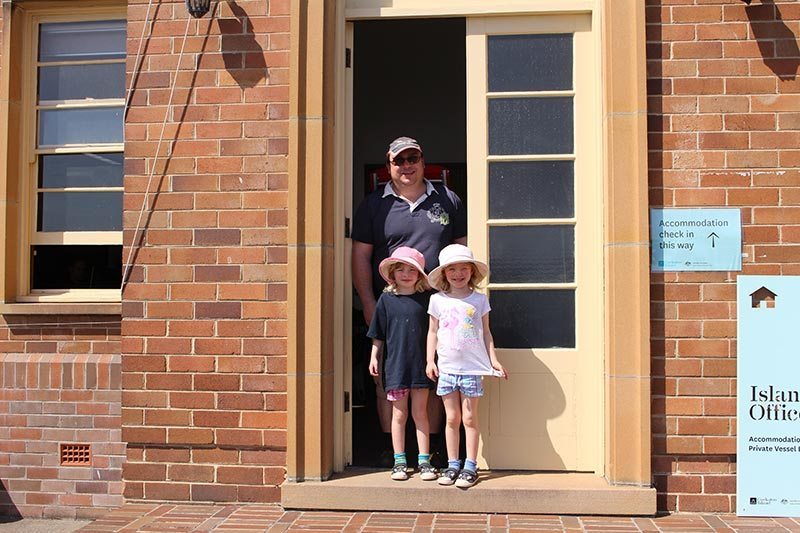 Hubby and the girls at the accommodation office on Cockatoo Island 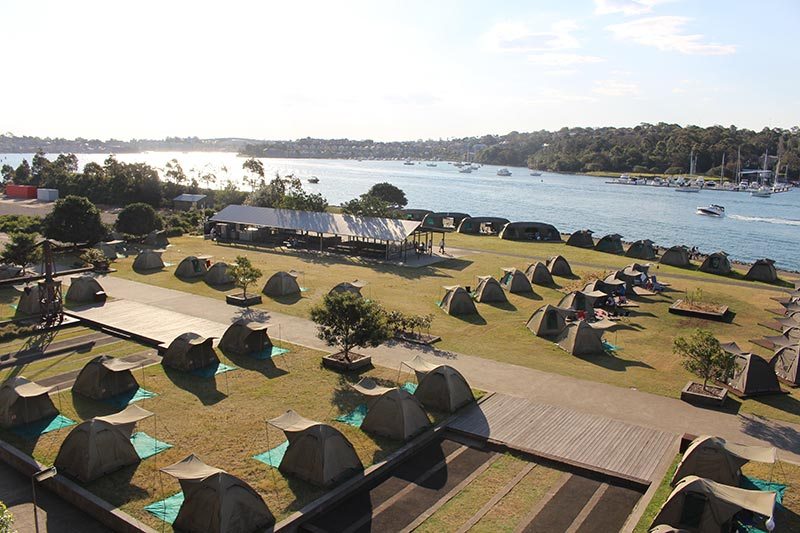 View of the tents on Cockatoo Island. Our tent was near the water. What a wonderful view!

I was so excited and so were the kids. I was looking forward to exploring what the island had to offer, relaxing at a cafe and later at our tent with a glass of wine watching the sun set and the boats go by. Some of this happened but not the way I had envisioned.

Getting to Cockatoo Island

As the name suggests it is an island and the only way there is by boat or ferry. We were lucky to park the car where hubby works so that saved with money for parking for the weekend, and then walked around the corner to the ferry. We had to take the ferry to one stop due to low tide and then get a bus to the next place to get the ferry all the way to Cockatoo Island. This was great for the girls as they loved the fact that we took a car, ferry, bus and then finally ferry again. A big adventure just to get there. 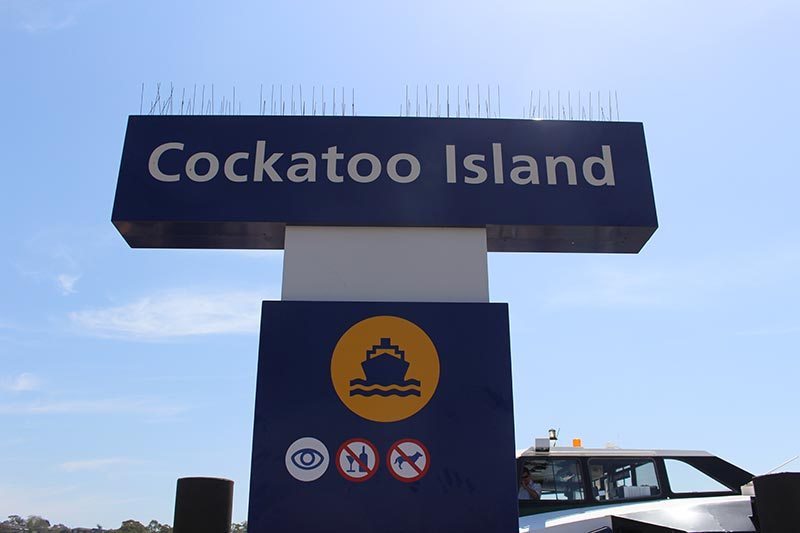 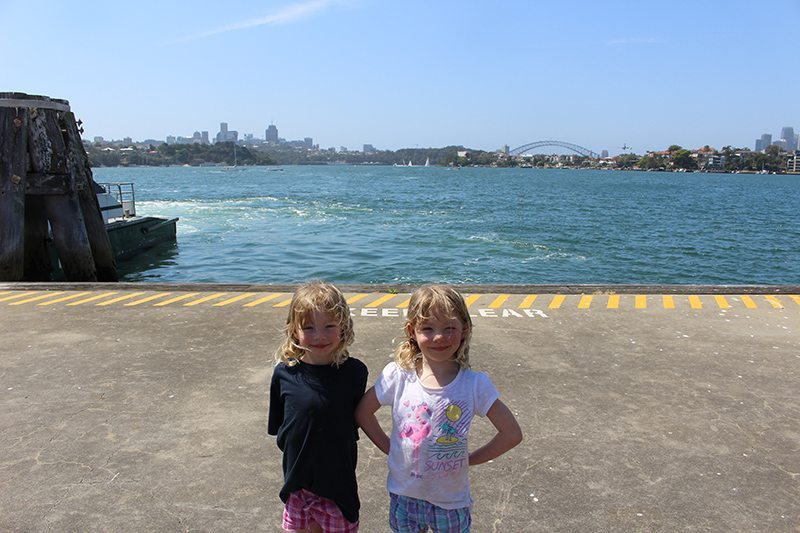 The girls on the wharf waiting for our ferry back to the city.

What did we pack?

If you are staying on the island you need to make sure you bring everything you need with you. This is why I decided on glamping as it means we are not carrying too much with us.

We took the following with us: 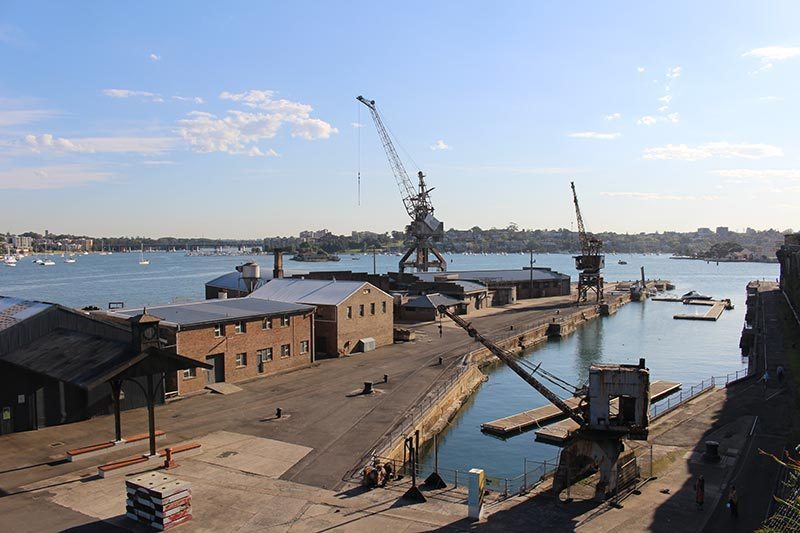 View of the buildings and cranes on Cockatoo Island

What can you do on Cockatoo Island?

What did we do?

After we arrived we organised our ice for our esky and then made sure we had wine for the evening. Silly to have to race to do this but the place to purchase wine closes at 4pm and we had a 2pm check-in. Once this was organised we relaxed a bit in our wonderful tent.

The tent and amenities that were provided were wonderful. The glamping tent came with camp beds, linen, towels, toiletries – soap, shampoo, conditioner and the like. It was a huge tent and I am glad I did not have to carry it or put it up. It was good to have it there and ready for us when we arrived.

After we sorted ourselves out we then went off to explore the island. We did get the self-guided tour (headphones that when you enter a number it tells you about a certain area or building), we just explored and had some fun. It was a hot day and the kids had fun running around and looking at the wonderful view. 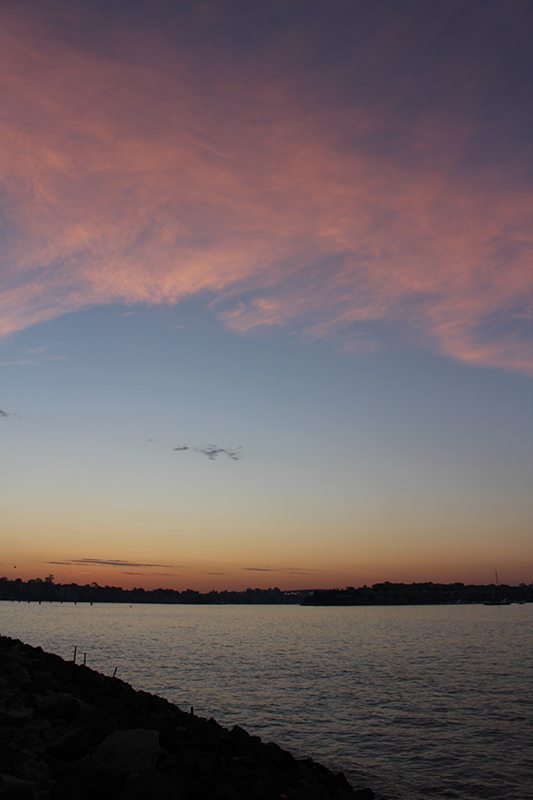 The beautiful sunset that we saw on Sunday the 5th of October while on Cockatoo Island.

I wore my Fitbit Flex and I did the following steps:

So as you can see you do a lot of walking! So make sure to wear comfortable shoes.

What did we eat?

I went shopping and got some sausages, chops (otherwise known as roast beef on the bone), and some nice bits of steak for a BBQ. We also purchased some fresh bread rolls, salad and and drinks to take with us. I froze the drinks so that they would stay colder longer. This was a good help especially with a very hot day that I did not expect.  The island has a wonderful kitchen facility for all that stay and we used this area to cook and eat our BBQ feast. Since we made friends with our neighbours we ended up having dinner with them as well. It was a nice evening. 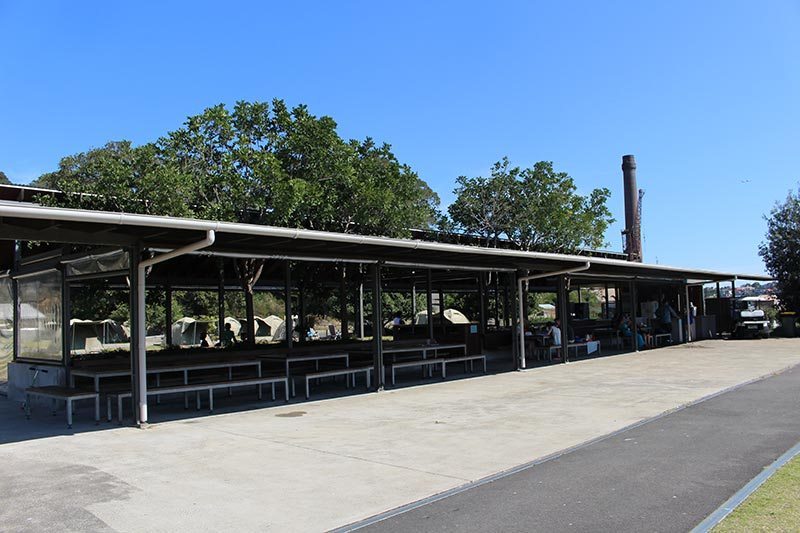 BBQ, Kitchen and eating area for those who camp on Cockatoo Island.

Before I went to Cockatoo Island, I did some research and realised that the pizza place on the island closed at 3pm to families…YES silly really. The weekend we visited, it was the October long weekend, the start of daylight savings and also still school holidays. So why close a place where families can eat and enjoy the island from your cafe/restaurant. I was told when I emailed before our visit that the owner has it as an adults only area after 3pm and if we wanted to come back during the weekday, not school holidays or the weekends it will be fine. I did mention that we were visiting on the weekend and due to school holidays that being there on a weekday would not be possible. I also explained that we were there for a family outing so having children with us was a given.

This is why we chose to take food for a BBQ for our dinner on the Sunday evening.

Other areas that offered food were all closing at about 3pm or 4pm… weird? Why did they not stay open to at least 7pm or 8pm or later… it was of course an island, people were staying there and they in turn could make more money. Strange if you ask me. You are stuck on an island where businesses could earn more if they stayed open and catered more for their customers.

Not sure if there is a reason for this but we could not understand it.

If you are thinking of staying on Cockatoo Island it is a wise idea to bring your own food if you have kids. Most likely places will not be open or if they are your child might not like what is on the menu. It is not like you can go down the shops to get what you need when you are in the middle of Sydney Harbour. 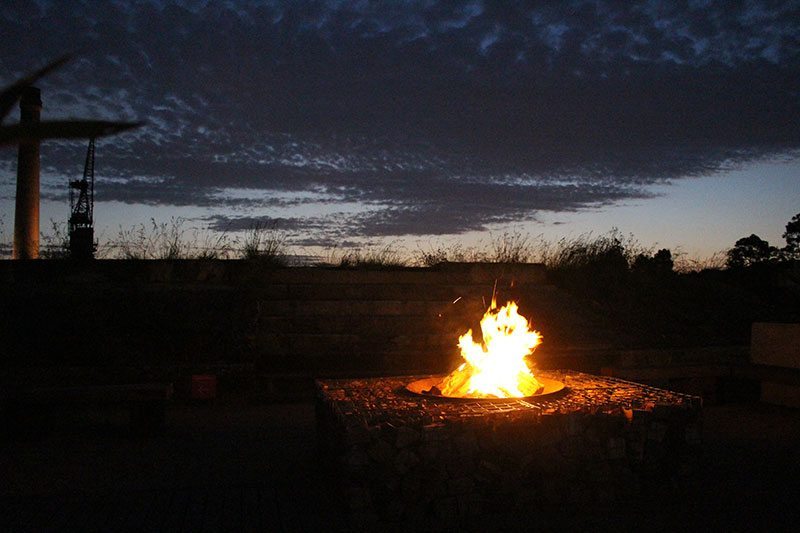 There is a fire pit and the ranger on the island lit it for the evening. 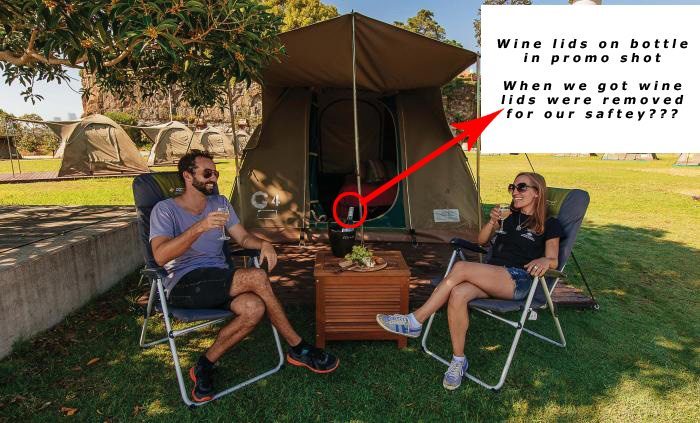 Cockatoo Island Promo Shot from their website. It shows a lid on a wine bottle although this is not allowed for your safety of course.

As you will see the promo image from the Cockatoo Island website shows that you can sit at your tent with a nice glass of wine with a lid on the bottle no less. However when you get there for the same experience, lids were confiscated and the top of the bottle was stuffed with kitchen paper to make up for the missing lid. 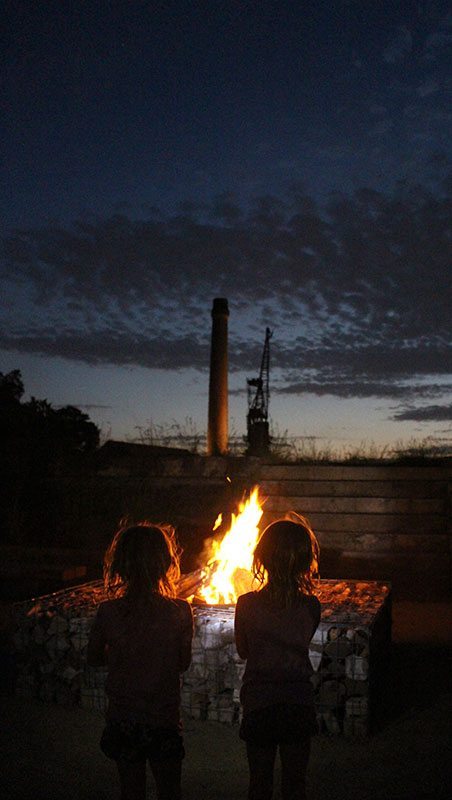 Looking at the fire while the sun sets on Cockatoo Island

What to pack if you wish to stay on Cockatoo Island 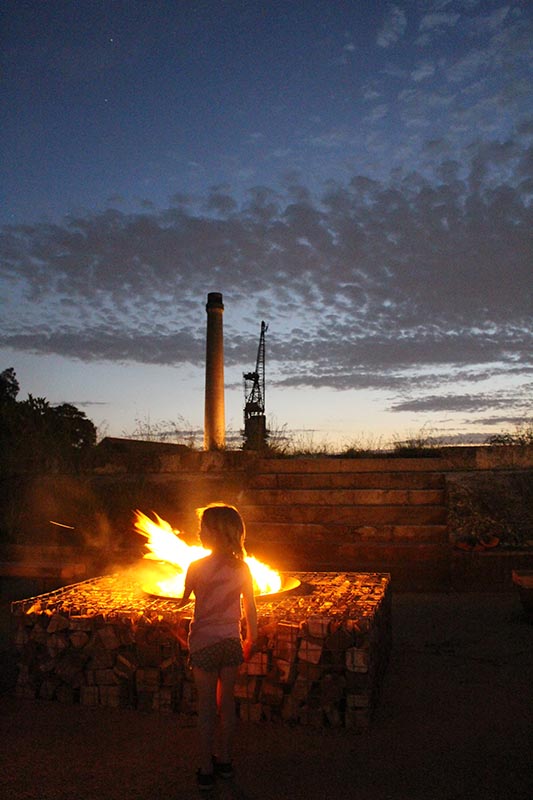 Enjoying the fire and outdoors on Cockatoo Island

Did we enjoy Cockatoo Island?

We had a great time but some of the things that we expected made the trip for hubby and I not as great as we hoped. Just a little more work on what they offer from hours and accessibility for families to services, and customer service side would have made it fabulous. From my perspective, Cockatoo Island needs to think about who visits their island. It is most likely families who come for a day or stay over, that said they are there to have fun and spend money. It is hard to do this when you cannot due to businesses not catering for families who are prepared to spend when they are there. Think about returns that they have lost due to such silly decisions to close a venue off to families at 3pm.

I loved camping, being somewhere different and it was great as it was a holiday without having to go to far from  home. 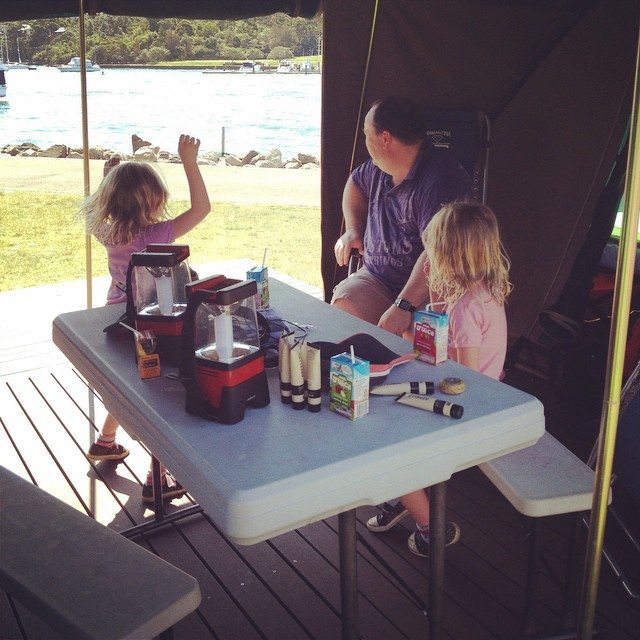 Relaxing at our tent on Cockatoo Island

The kids loved it and enjoyed racing around and exploring everything. It was the first time for the kids to go camping or really glamping. I did tell the kids that normally we would be camping in a sleeping bag not a bed setup with all the bed made for us.

We would definitely go back. Now we know what we need to do for our next stay or we could just do a day trip. Hubby would like to learn more about the buildings and one day we will go back to learn more.

Have you been to Cockatoo Island? Did you stay over? What did you think? Did you have fun? 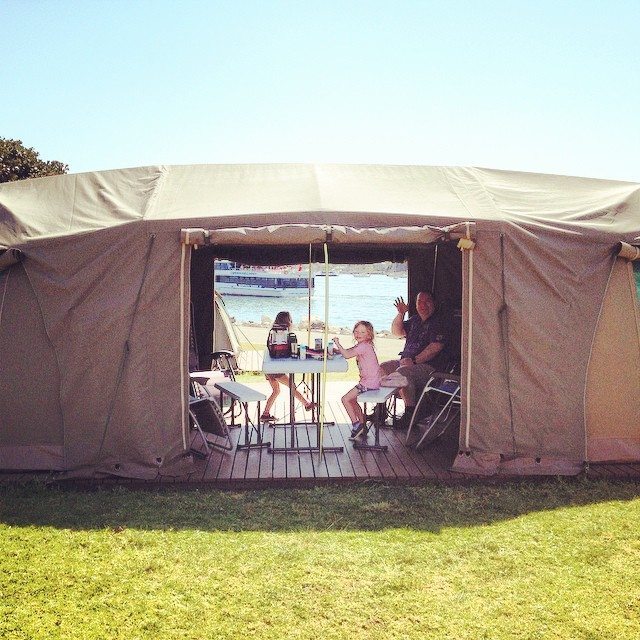 Our tent when we were glamping on Cockatoo Island

I Need A Wife!