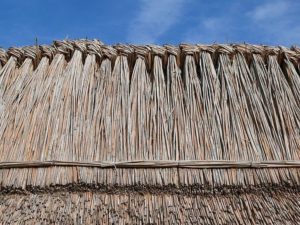 Last night we were all watching one of the episodes of the BBC Mastercrafts series, they showcase how an average person learns the following skills:

The BBC Mastercrafts series is rather interesting and I must say that I thought it would be a boring documentary series but it very entertaining. It takes 3 average people that have never done anything remotely like thatching or blacksmithing and plunges them into the life and the learning of this field.  So if you get a chance check out this show.

We have seen Blacksmithing, Thatching and the Green Wood Craft episodes, but it was the one to do with thatching that caught Julia’s attention. She was amazed that they were building a house out of straw. I did explain that it was only the roof that was straw and thatched roofs are sturdy and fine as long as put on in the correct way.

Julia was most insistent that this was not good, and should not happen, “A house should be built out of bricks as it is safer!” according to Julia.

This got me thinking of the power of nursery rhymes. The story of the “Three little pigs” has left its mark and convinced Julia that straw was not the right choice for a house. It might be blown down by the big bad wolf she said. She has a point. If a child is presented with these types of stories, then sees a programme showing part of the house being built with straw, what is she to think?

As I said I did try to explain but I don’t think she understood. She was annoyed that they were being so silly with their building materials and explained that we will not use straw for our new house (we are hoping to build a bigger house soon so she is giving us ideas for the new place).

Have you had parts of nursery rhymes or other stories come back in conversation with your children? If so what was it about and what story was your child referring to? Also if you have a straw roof beware of the big bad wolf. Send in your stories.