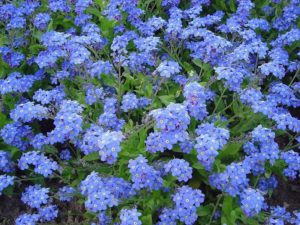 The official flower of the U.S. National Grandparents Day is the forget-me-not which blooms in the spring. As a result, seasonal flowers are given in appreciation to grandparents on this day.

Today is Grandparents Day in the United States.  This holiday is to honour “contributions seniors have made throughout history. She (Marian McQuade the founder of Grandparents Day) also urged the youth to “adopt” a grandparent, not just for one day a year, but rather for a lifetime.” (http://en.wikipedia.org/wiki/Grandparents_Day)

Grandparents Day is not just a holiday celebrated in the United States, other countries including Australia celebrate also. Read the below quote from the Wikipedia page about Grandparents Day:

I had no idea about Grandparents Day until a friend told me ages ago. I think it is a nice idea and we should make more of a fuss about grandparents and seniors that help us and our children. You might be surprised to know that  in 2004 the National Grandparents Council in California said that this is the official song – “A Song for Grandma and Grandpa”, by Johnny Prill.

So next month is Australia’s celebration, bookmark the 28th of October to celebrate your grandparents that help you and your kids.  If you are celebrating GrandparentsDay today, what have you done to celebrate?  Send in your stories.