The girls and I were invited to the premiere of The Biggest Little Farm, Open 16th January 2020 in cinemas.

I knew it was about a husband and wife that ditch city living to start their own farm, however, I didn’t realise the size of the farm, what was involved and of course how stunning the film would be.

The kids and I were transfixed and amazed at John and Molly Chester’s journey.

John was a filmmaker and Molly was a chef to the stars,  they both lived in Los Angeles (LA) and did have a dream to one day buy a farm. However, this dream was never realised due to not enough money, not knowing how to start and of course, being busy in LA.

It wasn’t until John shot some footage about a house that was housing hundreds of dogs that he met “Todd”, a gorgeous and well-mannered dog. John couldn’t let this dog go the pound, so Molly and he adopted him.

John and Molly lived in an apartment and it really was not for dogs. When they would leave for work Todd would bark all day and these caused complaints from neighbours and finally, they got asked to leave by the landlord.

Not wanting to go to another apartment and repeat what had happened previously, Molly said that she thought that this was their time to make their farm dream a reality. The issue was still money and no land or options, but she thought that it could happen.

Both John and Molly approached friends and family and they spread the word and then finally got told about over 200 acres of land that was in desperate need of revitalisation. 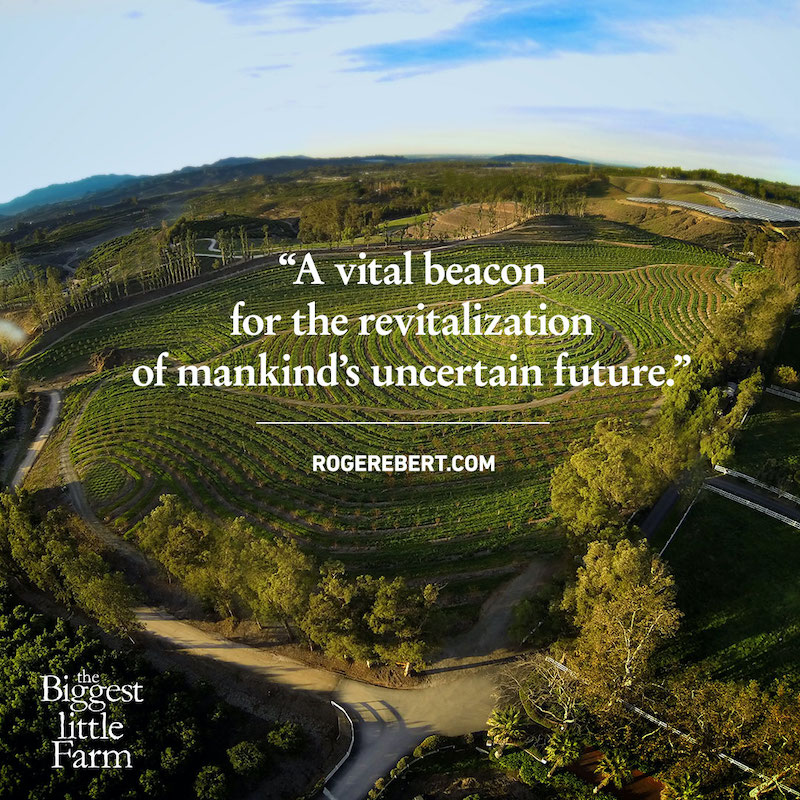 When John and Molly first saw their new farm it was barren. Nothing was living there, in fact, they found dead bees, dead everything! It was miserable and depressing.

The soil was so hard it was hard to dig into and when finally cut into wouldn’t break apart as it was more like a massive big stone.

So how did they get the farm (Apricot Lane Farms)  looking green, lush, return wildlife and have the soil be so productive for crops and other plants?

“Alan York, one of the foremost experts on soil and biodynamic farming, is on hand to help them create an ecosystem. Farming, he tells them, has rhythms. It will take a few years, he says, but eventually farming will become “like surfing” to the couple.” (From Quad City Times)

With Alan’s help and advise John and Molly get more animals to help the biodynamics of the farm. The Chesters get pigs, ducks, chickens, goats and more to help the farm grow. 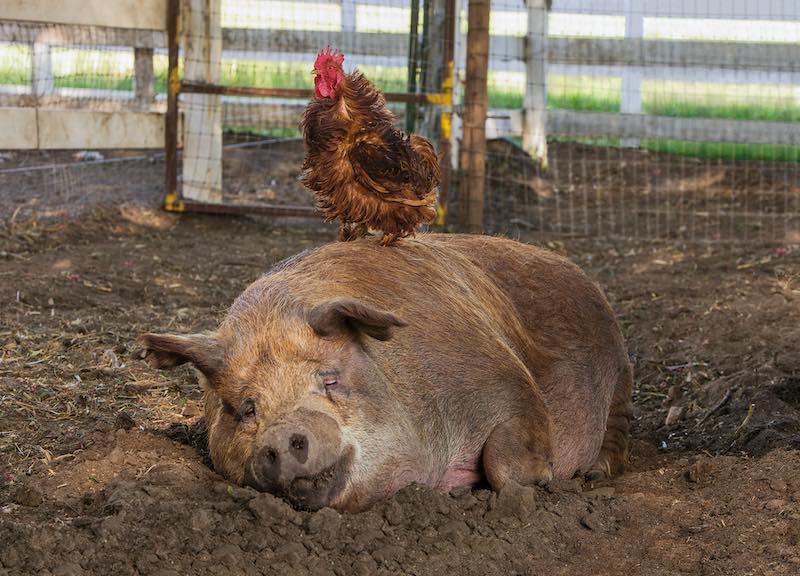 Greasy the Rooster and Emma the Pig

The first couple of years were tough but even by year two, there was a massive change in the soil and the environment. By year five many animals were creating a home on the farm. They had created a habitat for animals and plants, and it was a far cry from the drought-stricken wasteland that it started off as.

I was taken with the fact that Alan York insisted on having a ground cover for the soil – plants and grasses. In one scene there was a huge rain and wind storm that washed topsoil off others lands, but not the Chester’s. Since they had the ground cover on their soil they managed to not have the topsoil runoff and harness the water that dripped down into the aquifer to harness the water for their land.

The cinematography was stunning and a few scenes were truly magical. There is a sequence when you are looking at the night sky and the stars are moving as well as the clouds, this is simply amazing to watch.

The other amazing moment is when you see a close up of a ladybug fly, it is so detailed, it is like you are right in front of these insects.

The Biggest Little Farm makes you think if a couple from LA can overcome such adversity on a drought-stricken parcel of land then it is achievable for others. Why don’t other farms use the same model? If they did I wonder how much better off they would be? 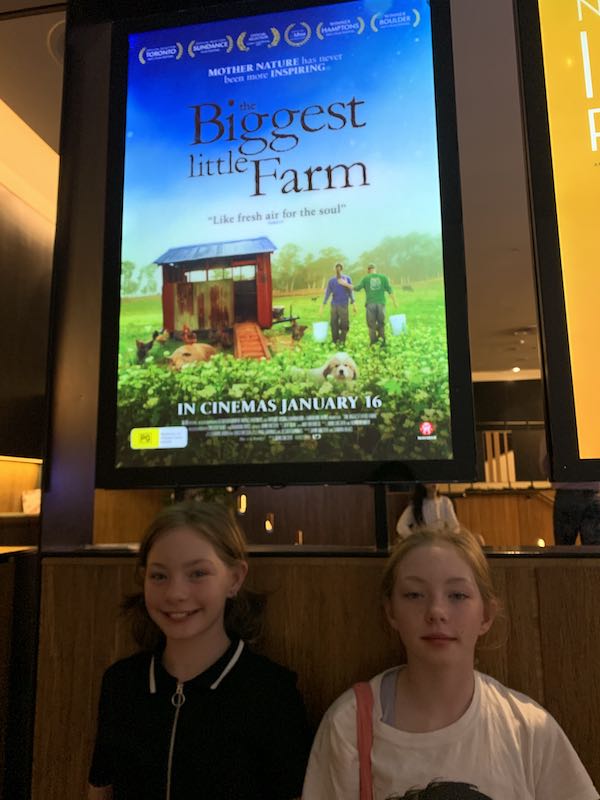 As we are facing a lack of water, hotter days and more due to climate change I believe that this film is a must to see as it shows us what can be done and how biodynamic farming is the way forward for a better environment and also healthier food. 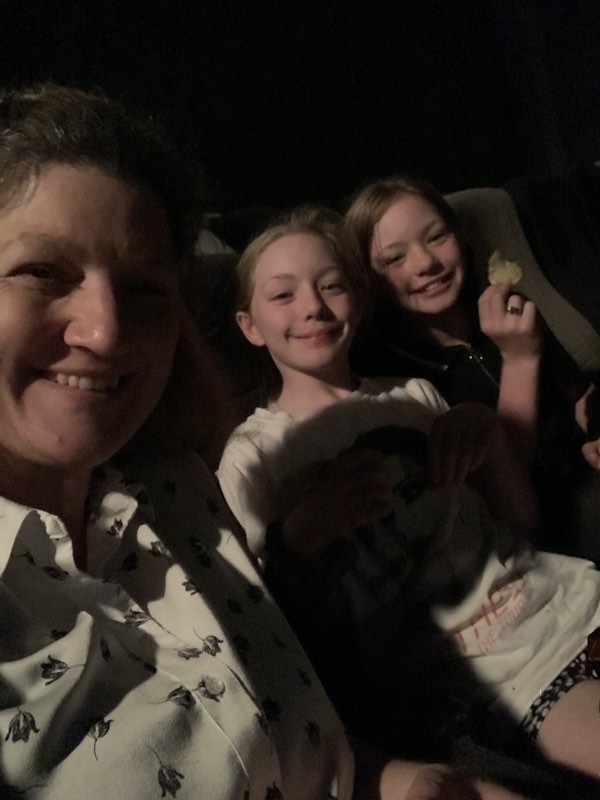 Oh and a HUGE thank you to the amazing woman who gave us her parking ticket.

The machine was not letting me use my credit card and I, of course, had no cash. I was about to make the trip to the ATM when she said she was leaving and didn’t need it. She paid for the whole night and it made our day, thanks again.

5 stars: We loved the film, the photography was exquisite, we laughed, cried and got angry with The Chesters in times of hardship, and felt joy when their hard work paid off.

Warning: If you take young kids you’ll need to be aware that there are scenes when animals are sick (don’t worry Emma lives but it is sad when she is sick) or killed due to being a pest (Kyote for killing many chickens). You don’t see anything horrible so you will not have to shield anyone’s eyes.

A BIG Thank you to Anne from NIXco for our tickets to see this fabulous film. We had a great night out at the movies and in Newtown.

May 2022 Get Unstuck Self Care Challenge