Thursday the kids and I were at the school playground. It was like any other day, kids climbing, getting dirty and doing things they cannot do during the school day. Then Julia hurt herself. Yes I just thought she grazed or scratched herself but it was not to be.

She was climbing a fence and when she was coming down a piece of it ripped into her arm. She was the proud owner of a little hole and as you can imagine she was crying and screaming. I took one look at it and thought we needed to get stitches and with that she freaked out even more!

Lillian told us to go to sick bay but as school was closed so was sick bay and no one was there. I did not think sick bay was the answer and we all made a dash to the medical centre that is around the corner from the twins school (thank god for this) 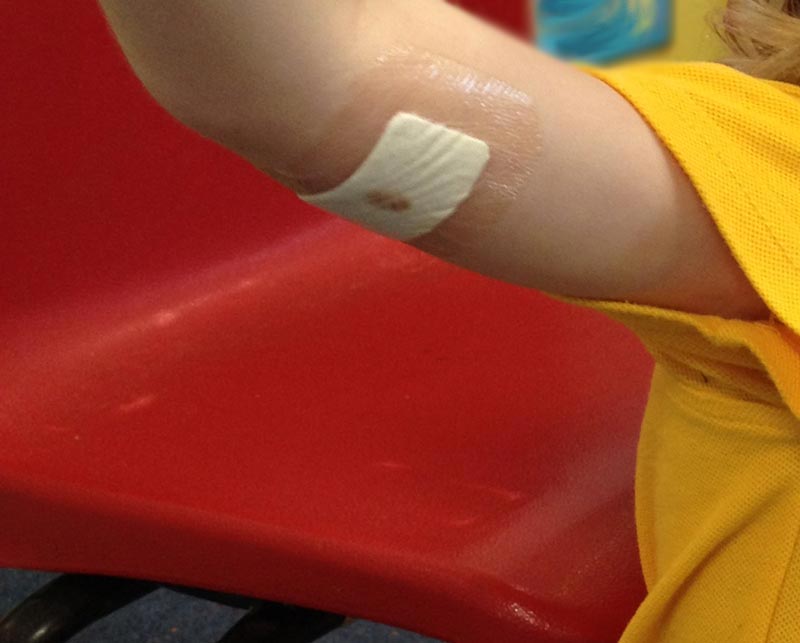 Julia showing where she had her first stitch. Brave girl.

We arrived and they looked after us immediately. The doctor looked at Julia’s arm and instantly said, “Yes it needs stitches”. So glad we were there and I trusted my instinct about what was needed to help my little girl. I was also grateful that I was there to look after her and have the ability to be there for the twins. I suppose if I was working I would have got a call to come get her or to meet them at the doctors practice. Either way I would have been there.

It was a drama with a screaming kid and all she could scream at the top of her lungs, was, “NO, NOT, NO, NO, NO, NOT, NOT, NO!” “I TOLD YOU I DON’T WANT A NEEDLE, NO NEEDLE!”
The doctor managed to give her a needle to numb her arm to allow him to do the stitches. This was hard to get her to stay still but we managed.

And now for the stitches! The nurse, doctor and I told Julia to look at me while the stitches were done and to not look. This of course made her look and freak out a bit. The numbing of the arm did help as she was a bit calmer after the contents of the needle worked their magic.

Then after the stitches were done a bandage was put over the top to make sure they would stay in place. We have to go back to get them out. Unfortunately they are not the dissolving kind. I hope that this goes well when we see the doctor next time.

During this drama, Lillian was very kind to her sister. On our mad dash to the doctors she made sure to check driveways for cars and made sure she held her sisters hand. While I was with Julia, Lillian was helping the receptionist and office manager at the practice and allowed me to be with Julia who needed me. What a lovely sister and daughter. Very proud of both my little girls. Julia was such a brave girl and I liked that Lillian stepped up to look after her sister.

I must say the ordeal was exhausting, draining, and upsetting for me the mother. I was glad I was there and thankful that she just cut herself rather than breaking a bone or something else terrible. The event took me a while to calm down from and I suppose anyone can agree, seeing your child scream and in pain is not fun.

Has any of your children/child had to get stitches? Did they do one better and brake an arm? Was it a major drama getting to help and dealing with the child that is in pain? I am sure it would be no matter how minor it does appear after. Julia is fine and next week we go to get the stitches removed. I am not looking forward to it but will be relived once they are out and she does not need them anymore.

Let us know what happened to you. Were you on edge afterwards? I found a nice red wine helped after we were home. I must say the next day I was still a bit out of sorts. Has this happened to you?