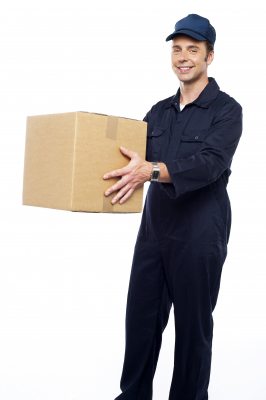 What should have happened, the parcel gets delivered. Image courtesy of stockimages at FreeDigitalPhotos.net

I was on a high due to winning a blog competition and just living in fantasy world for a little while. This was to end very soon when I get a call from hubby. He asked me if the parcel arrived. I then asked, “What parcel?”, then after a bit of back and forth finally remembered that he was having something delivered. I then told him, I had no idea as no one has knocked or come to the door and we have been home all day.

While on the phone to hubby I thought maybe they might have left it on the front step so opened the front door. No parcel but there was a slip saying that they tried to give us the parcel but we were not home. Not home????? I have not left the house all day due to it being freezing and cold winds. OHHH why on hell have they not knocked on our door!!!!!!!!!!! Not happy, and this is not the first time that courier/delivery companies do this. I am home all day and I discover a slip and not knocking or telling me they are there to deliver the parcel. Why make someone go out of there way with kids or even without kids, it is an inconvenience.

I looked at the slip and only saw writing that said that after 1pm it would be at the post office. Hubby needed the parcel and we were getting ready to head out anyway (we were off to see how a mate was going) so off we all went to the post office. We were rugged up something fierce as it is freezing and the wind just goes straight through you and is icy to boot.

Just to give you an idea of how cold it is the current temperature is:

I checked the mailbox, then took the slip from the mailbox and my slip from the front step to the lady behind the counter. She gave me the one that was from the mailbox but not the one I was really after. She then pointed out that I did not see the magic word. It was only available from MONDAY after 1pm not today? Why would they not leave it at the local post office?

I then rang the courier company to then have a smart annoying person on the other end of the phone telling me that it was not their fault if we were not home. I explained that their delivery driver did not knock on the door, did not alert me that he/she was there and then did not leave the parcel with the post office.  I told them I was most displeased by what they had done and made us leave the house to go to the post office in bad weather to try and retrieve a parcel that was not there. I then asked where they would have taken it, and I was told that they have sent it to Penrith in their depot there. Great, why over 40mins away and I then asked if we could collect it tomorrow, and the answer as you might have guessed was no. They are not open tomorrow.

I rang hubby as he was working close by and explained the situation and he was furious to say the least. He rang and they close up shop at 4.30pm and there was no way he could leave work at 3pm to collect this parcel.  Was the delivery driver not liking the cold? Well I didn’t either when I ventured out to get the parcel we are now not allowed to collect!

Why is this behaviour and service acceptable? I don’t like it and told this company so. He mentioned that I could complain by email. I told him that I was complaining now over the phone. Why can’t you complain over the phone? Why is it that decent service is hard to find and harder when you are considered out of the Sydney Metro area!

Why take the parcel back down the mountain when they have to drive it back on Monday anyway? Why can’t they send it back today while we at home? What type of training does this company give their employees if this is what they do to recipients of their service? I will never use their service due to what they have done to us today.

As I mentioned before it has not just been this company but it has happened other times that I have been home all day to then discover a slip for a parcel that I then need to collect at the post office.

Has this happened to you? Am I the only one getting their knickers in a twist about this annoying service and behaviour? Send in your comments.