I have some Exciting News!

I have been dying to tell you all. However I have kept quiet.

Documenting the pregnancy so far. Yes I know I have a belly… maybe that is due to having twins before this little person.

We are having another little bundle. This new person is due in January 2016, the first week to precise. We have some conflicting dates but they are all in the first week. Who knows the baby might decide to come earlier? Or later, you never know right? Did your second baby come on the due date? Or was he/she earlier or later? I am keen to know.

Yes I will be all hot and bothered and very pregnant in summer, I love summer and I hope that I am not too big and bothered in my favourite season.

We have decided to not find out what sex and leave it as a surprise. Hubby and I are super organised and have picked out a name for a boy and a girl to be prepared. I made sure to sort out names for the twins before they arrived and we had no idea they were going to be girls, so we were prepared either way. I did not want to be in the hospital and having an argument about what we call the baby. We will be keeping mum on these names as I would like to have it as an announcement when the baby arrives. Did you have the name for your baby sorted before you gave birth? Or did you decide once baby was here?

And you might be thinking is it twins again? NO we are having one this time.

Both the seven and twelve week scans confirmed just one baby. Also the twelve week scan showed that the baby was healthy so that is great news. I wanted to make sure that all was well with the baby before we told anyone.

I of course have been feeling horrible and it started early. I think from the first few weeks I have been nauseas and really feeling terrible. This made me think it could be twins again, and we would have been fine with this. However having one will make life a little bit easier the second time around. I can finally experience breastfeeding one child!

I’m still fighting all day sickness otherwise known as morning sickness. I have not been sick but have tried to be, and have been feeling queasy all day and night. It is just awful! I also need to eat food more regularly or else I feel ill, but then after I eat I feel ill. I am dammed either way! I just hope it passes. When I was pregnant with the twins I felt like this throughout the whole pregnancy and I am feeling the same this time, but not as bad with two babies.

I’ve also been very thirsty and don’t remember this being the case with the twins. Maybe I was and I have forgotten. One annoying thing is that you drink heaps due to being very thirsty and then have to constantly go to the toilet! Although one good side effect is that I have been warmer than usual and being in the Blue Mountains this is a good side effect. One of the only ones actually!

I am not the glowing pregnant type. Also due to my boobs being bigger normally they are really sore and uncomfortable without a bra (Maybe too much info my lovely readers). I don’t get ladies that jog and remain so active during their pregnancy (I wish I was one of these active and fit ladies). I have been zapped of energy and just want to close my eyes and fall asleep any chance I get. I’ve been falling asleep during the evening and missing crucial parts of the shows that hubby and I watch. The next show I am sure that we have missed a whole episode to then find out that I fell asleep and missed an essential part of the show. At least I have it to re-watch, but it is annoying.

Due to this being my second pregnancy I am showing a lot earlier than I thought I would be. I have also felt flutters for a few weeks and it is definitely the baby as it was the same feelings I got with the twins. Although I felt it later with my first pregnancy, I have read that it can happen earlier with second pregnancies. Thank goodness for winter as I have been hiding my growing belly with jackets and jumpers. It has got me worried. I hope by the end I will not be too big.

Having two kids and being pregnant does really make you extra tired. When pregnant with the twins, I could take a nap and have a rest and not be bothered. This time around I have to keep on going until the kids are asleep. Due to kids having school and other activities such as karate, singing and swimming lessons, the weeks have flown, and I look up and twelve weeks have already been and gone. With my first pregnancy I documented more things and took more photos each week. I managed to take one selfie at 10 weeks and will do another one at twelve weeks. I’m sure other mums and parents are in the same boat. 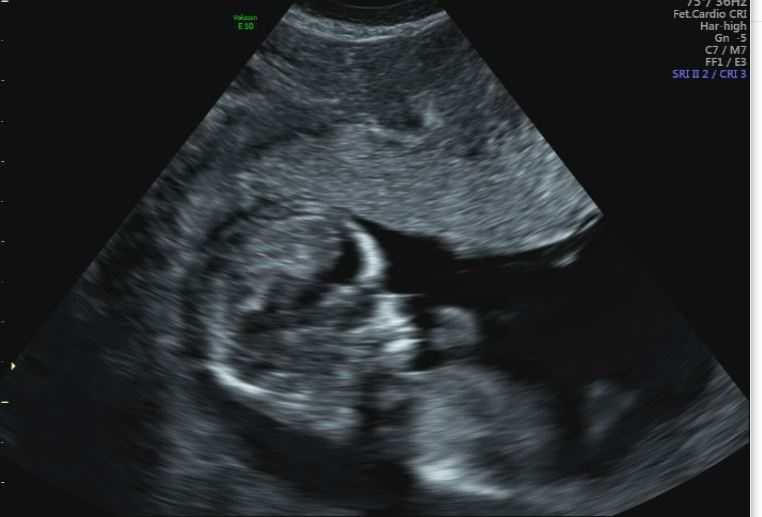 The baby’s profile and you can see one hand raised.

My plan of sipping cocktails by the pool and having a nice glass of red wine while at Problogger are not to be. However I will be drinking mocktails and still having a great time. By August I will be definitely rocking the baby bump and looking a bit bigger than I do now.

I will need to think about my wardrobe and finding some comfortable and stylish clothes to wear to the conference. Did you find it difficult to find some nice maternity clothes when you were pregnant? I have been looking but some are just tents and others are just boring. I don’t want to look bigger than I am, and I would like to look nice at the same time. I think this is a hard ask for pregnancy wear.

I did see online that there are some nice options but the stores that stock these labels are in the city and I have not been able to get there to have a look. I hope to do this soon, well before Problogger. What are your favourite maternity stores to get some fab items? Let me know. I need some ideas in this area.

The twin’s reaction was mixed. One was somewhat excited and happy and the other looked like she was in shock. I think it is huge news of the kids to digest and they need some time to understand what is happening. One did ask if I needed to go to the hospital today. I did say that I’m not having the baby yet so I don’t need to go. However when she asked me she was patting my side and looking concerned. Nice and very caring of her. I suppose the kids have a while to get used to the idea of having a baby sister or brother.

Both kids like the idea of being a big sister and teaching the baby things when it is a little older. Not sure what things they will teach this new person and it might not all be good. Did your child get excited when you told them you were having another baby? Or not look interested at all?

I did get a DVD with the twelve week scan and the kids were more interested to see the baby moving and to hear the heartbeat.

Since my twins were tiny at birth I am rather concerned that due to there only being one baby it might be HUGE! I hope not! My sister had a baby that was on the smaller side, and when I was born I was about 3kgs. So that is not HUGE. Yes I am having some weird thoughts and concerns. I hope I’m not the only one that does this.

I’m off on holiday from Sunday and will be documenting what we get up to. Make sure to check my Instagram Feed to keep up to date as well.

Did you find it hard to keep quiet about your pregnancy or did you spill the beans before twelve weeks? I just didn’t want to tell the kids for fear something went wrong, and have to deal with their reaction and explaining it all.

Let us know how you coped during the first trimester. I don’t like it. Although my sister did not get morning sickness with her baby. So I must have hit the jackpot! Everyone is different. Send in your comments.

Our Ballarat Holiday so Far