Last Friday the 12th of October was HUGE! Actually massive.

The twins went to another cub camp and to get them where I needed to drive about 3 hours….Yes, you read that right, 3 hours. 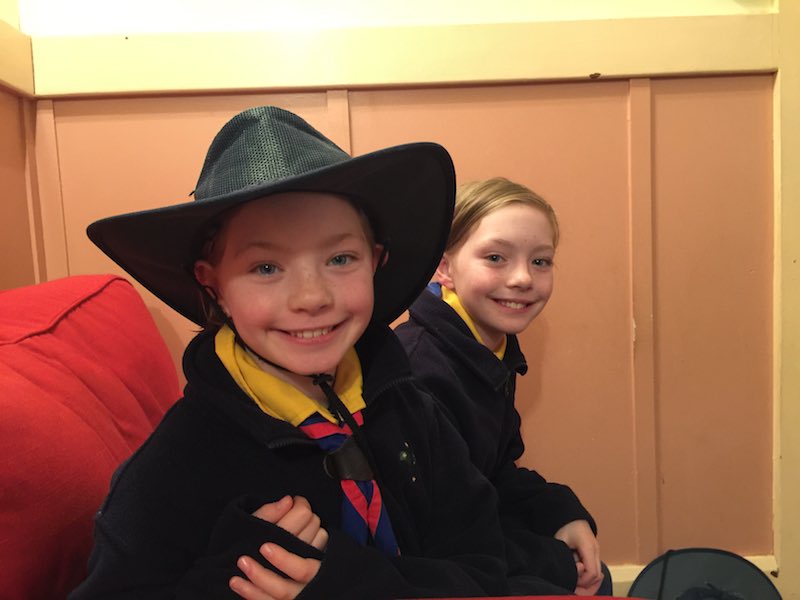 The girls ready for camp

Let’s just hope that 3-hour drive is it not like the 3-hour tour in Gilligan’s Island.

Gilligan didn’t have GPS and I do so there is a vast difference and therefore the chances of getting lost are rather slim.

However, sometimes my stupid GPS decides to direct me to streets that it shouldn’t and does cause confusion. Read on to have a HUGE giggle at my epic fail.

I do have an idea of where we are going and hubby has camped at this site as a scout when he was younger. Due to prior knowledge of the area I have been told that it is easy to miss the turn-off and if I do, I will need to go around again and this can be painful!

So we need to keep our eyes peeled.  I really don’t want to miss the entry to this place and have to go around the highway and roads again for another go.

I’ve already survived the twins packing for camp and all the silly behaviour that came with it. Their bags are in the boot of my car ready for our huge journey to the campsite.

Not only do I need to take two kids to camp on a long car trip, but I also have to pick up Alexander as I will not be able to pick him up tonight due to being hours away. So the girl’s little brother will join us all in our adventure to the campsite.

I have learnt one thing from a previous camp, I must feed them dinner. The girls last camp I assumed that they would get fed dinner, however, this didn’t happen. The organisers did feed them supper (snack) but it wasn’t dinner.

On our way, we will stop off to ensure that all kids are fully fed and happy before they will be finally dropped at the campsite for two days of fun.

I have to pack a bag of drinks and food for Alexander so that if he wants anything all is sorted.

I’m hoping that Alexander doesn’t scream all the way home as has happened before. I hope that daycare has tired him out and the adventure of the long trip will keep him busy.

EPIC FAIL: Remember I mentioned I would be fine as I had GPS to help me find the way. Well this didn’t happen. In fact Google actually directed me to a street that is no where near the camp and managed to do this twice. Yes, I know how silly to be directed to the wrong place once but twice! The second time around it made it sound like we were actually going somewhere different, then low and behold I ended up in the same stupid street that is not where I needed to be at all.

It was not just me that did this, there was another man taking his kids to the camp and he did the same thing I did, but to his benefit he only did it once. I did yell a bit and say a few choice words but was rather concerned as the kids and I were super early and due to not knowing how to correct this navitagion failure I was worried I would be very late now.

This other dad and I looked at the map he had, one mum that was already at the camp called me and helped me out over the phone. Due to this extra help or brains trust, the kids and I and the other family managed to find the campsite and where we needed to be.  I wasn’t that late and in fact only added an extra 20 minutes to my journey and to my amazement there were so many others arriving after us, so that made me feel better.

Last Friday was officially the last day of the school holidays aside from the weekend, as Monday the girls go back to school.

Yep, term 4 starts soon! How cool is this?

Not much will go wrong on Monday morning, right? Totally tired and exhausted kids from a full weekend away and having to get up earlier to go to school. I hope they get up and get organised okay.

Oh, and did I mention that we have had non-stop rain, and it is not stopping this weekend. In fact, it might be really heavy rain on Saturday.

The kids are camping in tents and will get very wet. I am sure that all the nice sorted clothes that went of dry and clean will come back all soaked and covered in mud. I just hope that they manage to put it all in the garbage bags provided so they don’t get everything super wet.

Another massive win is one of the other parents are able to take the twins home, so this saves me dragging Alexander to another 3-hour drive to pick them up on Sunday.

Have you had massive days during the school holidays? What did you get up to that required a HUGE drive with the kids too?

I am looking forward to things going back to normal next week with school returning.

Update: The twins had a wonderful time at camp. They came home very wet with everything in their bags wet and muddy as I expected.  It has taken me two days and I think I have finished the washing. Phew…. but I know that there is more to come when I tidy up other rooms and change the sheets for everyone. The washing never lets up.

Spriggy The New Way To Do Pocket Money

Twins for Meghan and Harry? Really???