Disclaimer: Little Nation sent me a Balance Bike to review. However due the twins ages they were too old. I asked a friend to review the bike for me and to write a review. Max’s Dad wrote the following about their experience with the Little Nation Balance Bike. Thanks so much to Max’s dad for the lovely review and fab pictures of Max enjoying his new Balance Bike from Little Nation.

Little Max loves his Little Nation Balance Bike. I got it for him when he was about 20 months after he ripped the front wheel of his trike off in an over-ambitious downhill incident. I also got him a helmet. 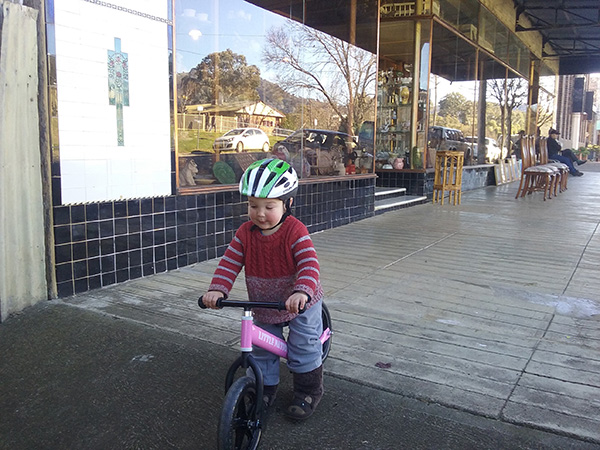 Learning to ride was a lot easier than I thought it would be. He fell off a few times trying to get on at first but could easily pick the bike up himself and try again. After a couple of days he was walking along quite comfortably and after a couple of months he put his feet up to glide along using his momentum. After four months I was jogging to keep up with him and now I just ride my own bike alongside and we zoom around town together. Our longest ride so far has been 3.5 kilometers without a single fall.

The seat height is adjusted with a 4mm hex key and I found putting it very low at the beginning helped with confidence, but putting it higher and higher as he gets more confident and taller helps him keep his legs up easily. At two and a half Max is nowhere near the top of the seat adjustment and he’s a pretty tall kid. The Little Nation people have left a lot of room for kids to grow into their bikes. Although we’re not nearly there yet, I think the wheels are replaceable with bigger 12 inchers and possibly even 14 inchers when he gets to that height.

The seat position can also be adjusted with a hex key and moving the seat forward in the beginning and back as he grew in confidence and arm length helped make the bike more stable, but meant there was more weight on the handlebars. It’s something worth playing with and I’m glad I’ve got the option. 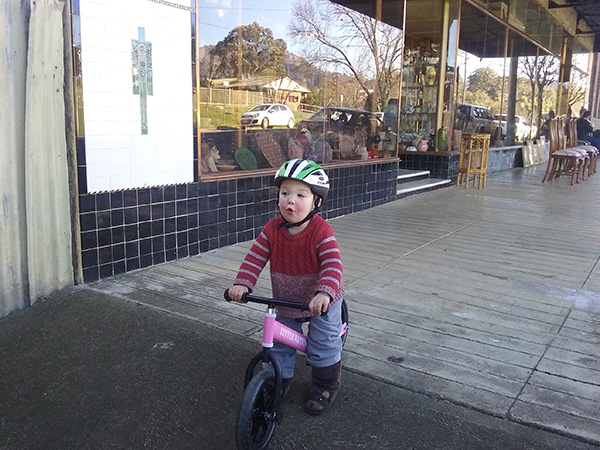 Soon Max will be zipping around on his balance bike. Did your kids first learn to ride on a balance bike?

The Little Nation Balance Bike is a very sturdy little bike. The headset is easy to tighten, the handlebar is a single piece of tubesteel and unbreakable. The wheels are molded true and I’m very impressed with the ultra-strong cone and bearing hubs – just like daddy’s bike! Little Nation has over-engineered their balance bike in all the places where failure tends to be catastrophic and I’m confident it can handle anything a person under 27 kg can throw at it.

All in all, I’m extremely pleased with the Little Nation. Max has already spent many, many hours on it, and has many years before he outgrows it. It exhausts the poop out of him and we’re guaranteed a nap, 12 hours of night sleep and grateful gobbling if we go for a morning ride for an hour or so.

I’m sure the Little Nation is the first step on a lifetime journey of riding bikes.

Did your kids gain confidence with a balance bike?

If they are learning to ride maybe a balance bike might be a great to help your child/children to help their confidence with bike riding.

Let us know if you have given a balance bike a go?

I would just like to say a BIG thank you to Little Nation for providing the Balance Bike for review. Max and his daddy love it, and now Max is a confident young rider of bikes. Yes how cool is that!