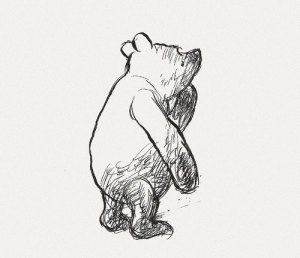 Original illustrations and drawings from Ernest Howard Shepard of Winne the Pooh. Have borrowed it from the internet as they were up to advertise the sale of the drawings by auction some years back.

Last night Julia picked the book for the nightly story. She picked a small book of stories about Pooh Bear or known as Winnie the Pooh. Daddy was reading the story and he got tapped on the shoulder every 2 minutes or so with the following comment from Julia. “Daddy, I don’t understand! Why is he called Winnie the Pooh!”

Well it is a good question. Why is the teddy bear in this story called Winnie the Pooh or Pooh Bear?  I discussed this today with the girls grandmother and she found it interesting that she digested the info that daddy was telling her in the story and she was then thinking of her own questions about this new information. It has troubled her all day and night. Why is this teddy bear got the name he has! We promised Julia and Lillian that we would get to the bottom of it and report back tonight.

I looked online and got quite a lot of information from Wikipedia and explained some things. The Winnie part of the name comes from the place Winnipeg in Canada. The Pooh part comes from a swan, not sure why the swan was called pooh or if it just had an issue.  Maybe it was a black swan?

Below is an exert from the Wikipedia page about Winnie the Pooh we learn more about the name:

“Christopher Milne had named his toy bear after Winnie, a Canadian black bear which he often saw at London Zoo, and “Pooh”, a swan they had met while on holiday. The bear cub was purchased from a hunter for $20 by Canadian Lieutenant Harry Colebourn in White River, Ontario, Canada, while en route to England during the First World War. He named the bear “Winnie” after his adopted hometown in Winnipeg, Manitoba. “Winnie” was surreptitiously brought to England with her owner, and gained unofficial recognition as The Fort Garry Horse regimental mascot. Colebourn left Winnie at the London Zoo while he and his unit were in France; after the war she was officially donated to the zoo, as she had become a much loved attraction there.[3] Pooh the swan appears as a character in its own right in When We Were Very Young.”

As I stated before this does explain the name Winnie but not really the name Pooh. Although A.A.Milne wrote the following to show why Pooh is called Pooh.

“But his arms were so stiff … they stayed up straight in the air for more than a week, and whenever a fly came and settled on his nose he had to blow it off. And I think – but I am not sure – that that is why he is always called Pooh.”

Some things you might not have known about Pooh Bear:

Below are some links to more interesting tidbits about Pooh Bear and of course information about Poohsticks and how you can now play online:

I do think that it shows a very good mind to be questioning things that are told to you and especially in books. So good on Julia. We read it to her and Lillian also tonight for the answer of why Winnie the Pooh has his name and it answered half the question. It could be like others have summarised the teddy was named by a child so who knows why it is so. Lillian has her teddies (two of them) and they are called bummies. So anything goes. Have you had issues trying to explain some things to your children? Has the explanation been easy? Did you have to look it up? Send in your comments.

Garmin & Disney Team up with the new Vivofit Jr 2

Fun With Disney On Ice Frozen