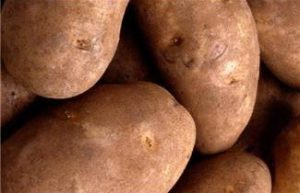 Goodness knows where this idea of the potato list came from; maybe it was a book, a show, friends from school, or their colourful imagination?  I have asked if Mummy or Daddy are on the list and was told that we are not on the potato list and either are the girls. Phew that was good to know.

The twins lately have been acting up; maybe it is the excitement for Christmas and waiting for Santa to come. I loved the lead up to Christmas as a kid and it was very exciting times, so I can imagine how wonderful it is for them as well.

I suppose the next time one of the girls does something naughty I might suggest that we put their name on the potato list? This might mean they will behave themselves; well I can live in hope. The other day the girls were being silly and not behaving while we were shopping at Coles. I then told them that they better behave as Santa can see all, and they don’t want to be on the naughty list.  One man saw and overheard this and could not stop laughing. I must have given him an idea as he signalled to me that it was clever and well done. Not sure if that worked, but I gave it a go!

On the whole the kids are very good and are not on the potato list or the naughty list here, they are just testing our patience and are super excited kids awaiting Christmas and the surprises it brings.

Are your kids on the potato list? Or have they been good? Maybe you could warn them that if they don’t behave they might be getting potatoes for Christmas.  Have your kids made something like this up? If so what is their version of the potato list? Send in your comments.

share
0Comment
got to be good for Santa or no presents, have you been naughty or nice