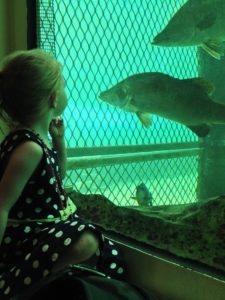 Wow look at all those fish!

My mother treated the girls and myself to a day out at Sydney Aquarium yesterday. The day was nice and sunny, the kids were so excited to see all the different animals. Previous to going I emailed mum a link that said that you can get a family pass for $60, but of course there was fine print to say that this deal was not available in school holidays. Mum was fine with this and purchased the family pass at the higher rate as it is school holidays.

The girls and I arrived at Darling Harbour ahead of time which was great planning. We parked the car, got our stuff and proceeded to walk to the Aquarium.  When the twins and I arrived at the Aquarium there was a huge crowd, kids and families everywhere. Well it was holidays, so it was to be expected.  Since there was heaps of people the line to get in was huge. I decided to queue in the pre-paid ticket line to help us get in sooner. Mum and my sister arrived in time as the line was moving quite quickly.

When mum arrived she told me that she had learned that adults were being charged at kid’s prices. When we approached the desk the man behind the counter refused to give back the extra that mum had paid as she was firstly denied the deal of the $60 family pass due to school holidays, then to find out that adults could get in cheaper on the day and to then pay more was just rude. Oh well, we all went in and proceeded to have a great time.

The girls were amazed at all the fish and animals that were in the big tanks, they loved seeing the clown fish and all kids at the tank yelled, “There’s Nemo!” it was so funny! 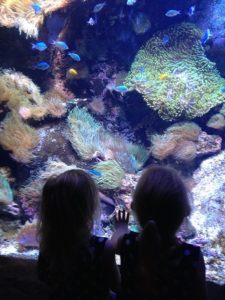 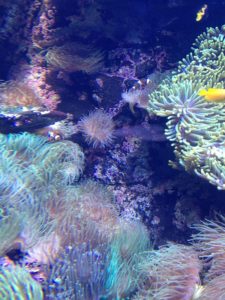 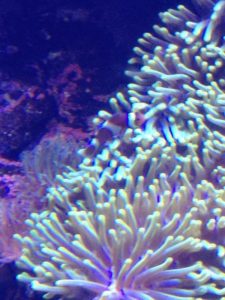 Here is a close up of one of the Nemos

My girls were worried as they could not find Dory but did find one so relaxed after that. Phew!

It was nice that they were able to get up close to creatures like sharks, dugongs, star fish, sea horses and many more!

It was not until we got to the penguins that Lillian told me she needed to go to the toilet. I looked around and could not see where there was a toilet. There was no signs anywhere, just the green exit signs. My sister the girl’s aunty needed to go also so we all went off for our search for a toilet. We wandered around aimlessly in our search but could not find one anywhere. My sister is pregnant and I had a five year old child with me so it was lucky that we all made it without an accident.

We ended up asking a girl behind a counter where the toilets were, she then told us to go through a door marked, “Staff only”. I told her why would we venture there as it was not where we should be going. She then said to go through the first door on the left. We got to that, and it was locked, we then continued down the corridor to another “staff only” door and that was open. All of us went through this door to finally come out to the area where the food was. Finally there was signs saying where the toilets were. We all went, I made sure to go as I had no idea when I was going to get back there next.

The next drama was to then find my mum and Julia, there are no signs to let you know how to get back to any of the areas in the centre. So we left them in the penguin area, but we had no idea how to get back there. It amazed me, and my sister how a place that is full of kids, parents and a lot of people cannot have signs to where the toilets are, and of course directions for where the sharks are, or where the tropical fish are. What happens if you would like to go back for another look?

Finally mum answered her phone and we met up with them. Phew!

I am not having an overall whinge about the place. We had a great day at the Aquarium aside from a little drama. The kids got to see great creatures, and have a wonderful experience.

Some things that I think could improve the Aquarium:

After the aquarium we had lunch and then went off for the kids to run around a bit. Darling Harbour has some great things for kids to play on, there is a playground, water play area, slippery dips, merry go round and other rides.

The girls went on the merry go round, then got totally soaked in the water play area, then had a bit of fun in the sand pit, then they went off for fun on the big slippery dip.

Both girls were super brave on this massive slippery dip and went down head first and did all sorts of tricks. They are action kids and had a blast. There were tears and tantrums when we were leaving as they were having so much fun.

As you can imagine both kids were very tired and slept in the car on the way home. I am so glad that we got to spend the day with my mum the girls Nana and my sister, the girls Aunty. It was a lovely day and it did not matter about the little upsets that we experienced.

The kids cannot stop talking about the aquarium and the fun they had at Darling Harbour.  At the Aquarium shop I got the girls some Octonaut thongs (these are shoes in Australia), they love them.

Have you been having great adventures these school holidays? Where have you taken the kids? Is there somewhere that has been exceptionally great? Let us know.

Swearing at Kids Is Not On!