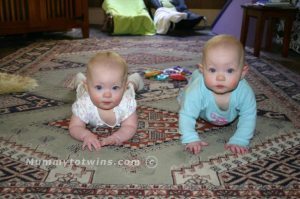 My girls at 8mths

While it may be cute to dress twins up in identical clothing and provide identical bedding and toys, there will come a time when they want to be viewed as individuals. Although choices and likes may remain the same as his or her twin, they could just as easily begin to differentiate themselves from the other. In order for your child to grow as an individual, you need to give them those choices and let them develop their own personalities.

1. Comparisons and Labels – Sometimes it may be hard on a parent, but you need to stay away from comparing one child to the other. Saying things like, “your brother likes it” and “why can’t you be more like your sister” can be some of the utmost disparaging remarks you can make to someone who is trying to solidify himself or herself from the other. Sayings such as these can also make it seem you are putting emphasis on the allure of the other twin. You don’t want to split your affections and you need to realize that each child is going to look at the world differently.

2. Food Choices – Allowing them to choose their own meals can be beneficial to each child securing their individuality. His or her tastes are going to change over time and there is nothing to say that each child will prefer the same dish that his or her twin enjoys. Something as simple as food can make a difference in how children feel about themselves and empower them to make future decisions.

3. Clothes – Avoid forcing them to dress alike. If they wish to wear the same clothes, then that is their decision to make. However, too many parents force wearing alike onto their children in order to promote that they are indeed twins. Allow them to choose their own wardrobe and encourage the individuality.

4. One-on-One – In order to help promote individuality, spend one-on-one time with each child separately, but equally. Try to avoid spending more time with one over the other. This could seem like favoritism. Let the child specify which activity he or she would like to do with you. This helps him or her develop decisions on the child’s own without being influenced by the twin. Passive and submissive behaviors in one child could make it seem like they’re alike when they’re truly not.

5. Birthdays – When it comes to the birthday cake, let each sibling decide which one he or she would rather have. Instead of one large cake for both of them to share, why not use two smaller cakes each with their own candles for the children to blow out individually? This could help the child signify that although the date on the calendar is shared with their sibling, it is still a special day for him or her as an individual.

Although the above helps develop individuality, don’t try to discourage a bond that twins have the ability to form. They may simply enjoy being the same as their twin and prefer to remain that way. Allow them the chance to discover themselves without driving a wedge in between them. You can promote individuality without forcing it on them. Allow each to make their own decisions and let situations develop from there.

This post is contributed by Christine Maddox. Currently she is pursuing her Master’s degree from University of Texas as well as blogging for www.4nannies.com. She loves to write anything related to parenting, kids, nanny care etc. Send Christine an email

Leave a Reply to Foodie in WV Cancel reply