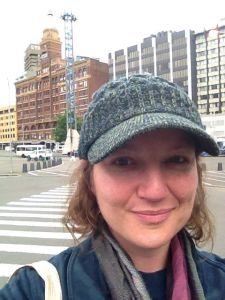 On way to the uni for the exam

Today I went to the university for my contracts exam, I navigated the large campus and with some other student I found the place for the exam.
I did manage to get to the right building but could not see where there the exam would take place. I looked online via my wonderful iPhone (the girls and hubby gave it to me for my birthday this May – I have a sparkly pink case chosen by the girls) and ended up with the same information that I copied down at 4am this morning; this information was still no help to me.

With about 10mins left to find the place to sit this exam I was starting to get a bit concerned. I had been in the city for hours and now I might be late. Oh no this cannot be happening, after of course a much needed toilet break I headed out the door the way I had come in. I asked the first person I saw and he seemed to be in the know and I followed him. Thank god, I found it. Well? Really I followed and found it but still the same outcome. So no point dwelling on if I did it or someone else did.

Now to find the seat number for my exam, if you have never sat a university exam they give you seat numbers to make sure it is you and you have turned up for the test. I found the right number and sat at the right desk and waited. The man at the front told everyone to put their bags and belongings under their chair. I did as asked. However I left out my two pens, a notepad that had never been written in, a piece of paper that had my seat number and other info that I needed, and of course my reading glasses (that were still in their case).

Before proceeding with this exam you need to fill out the answer booklet with your details, Name, Course code and number, Student ID, Paper code, and Seat number. You also need to detach a part of the paper so that they can take it and you have to sign this as proof you were you and not someone else sitting your exam for you.

I did not have my student number on me but remembered that I had it on my phone as I logged in to get the room number of the exam. I was going to turn it off but wanted to get the student number first and then I was about to switch it all off. One of the ladies that was monitoring the exam, (it was not just contracts that had their exam today two other faculties had exams in there as well) noticed I had the phone and I explained what I was doing and then told her I was turning it off and packing it away. While she was explaining this and I agreed and told her that was what I was doing,  she then told me that I needed to pay attention to the man that was giving us all instructions. I then explained that I was but she was talking to me as well. I found this rather frustrating, being told to listen to someone and them telling you something else.

Just before the exam started another person that is overseeing told me that I cannot have my glasses case on the desk. I then explained that I had my reading glasses for the exam and I needed them. She said that glasses were fine just had to lose the case. So I did.

We had 10 minutes reading time and then our 2 hours started. In the 2 hours we were then allowed to answer and to write responses, but during the reading time you cannot do anything but read.

Once the exam started not even 10 minutes in, a man who is overseeing the exam came to collect the piece of paper that I had signed to prove it was me sitting the exam and asked where my student id card was? I explained that I don’t have one as I study online and that I have a drivers licence if that would help? I also mentioned that the exam had already started and why is he doing this now not later or why was this not done before? His answer was that he did not notice.  I stopped the exam, got the drivers licence and then he did his thing and I had to leave it on the desk until I completed my exam. 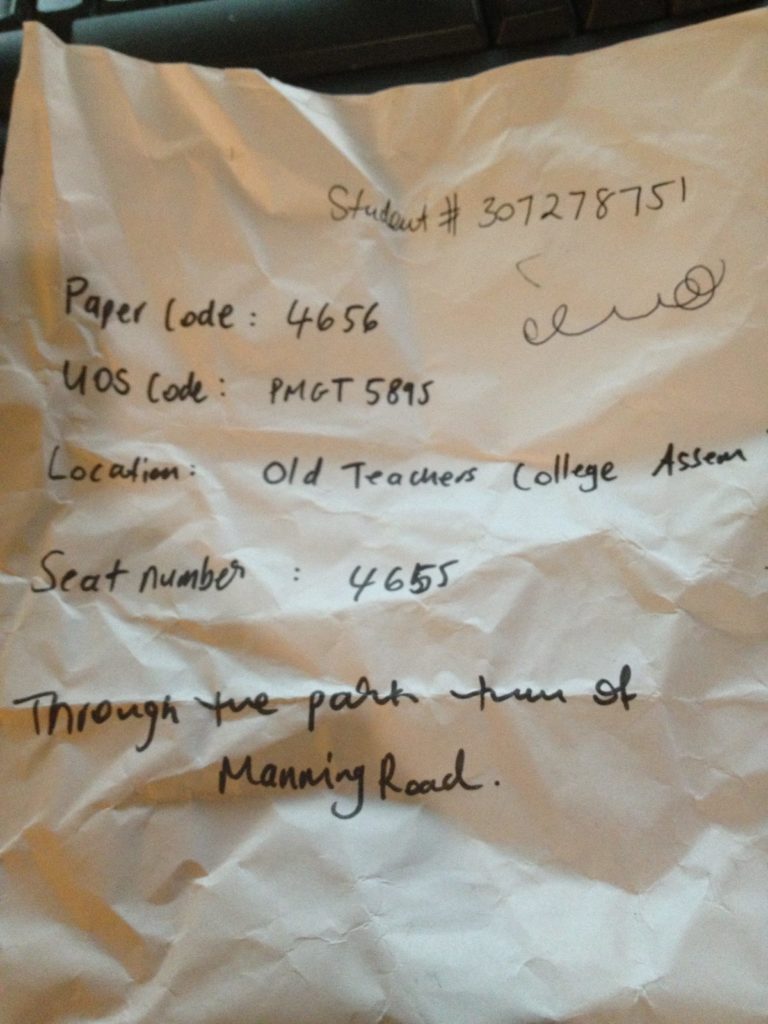 Where to go for the exam and other info for paperwork

One of the ladies that were keeping an eye on the students came up and remarked on my piece of paper with the room number, paper code and so on. She looked at it on one side, then the other and thought it very suspicious and told me I could not have it on my desk. I did not understand where the threat to the exam was but went along with it and put it under the desk (you will see the menacing piece of paper as I have added it as an image for this blog post – you can even see I have used it to test my pen as well)

Then a younger lady that was also helping with making sure that there were no funny business looked at my notepad and asked if I could open it. It is blank I said and showed her. I told her that I did not know if I might need to write notes of work or ideas out and that are the reason for it. She decided that too had to go and it joined the crowd under my desk.

I am not sure how I went but think I did o.k, only time will tell. I managed to finish with 40 minutes spare and was able to drop off my specialisation form to the right people for next year’s graduation. I did leave a couple of questions and went back and looked at them, but could not remember the answers. I believe I gave it a good go and tried to answer and give more information for all questions.

Not sure what the people that were overseeing this exam thought, where they bored and wanted to be seen to be doing something? It was just rather bizarre, removing things that are no threat to cheating or anything like that at all.

I must say my hand and arm is very sore from writing so much in a short space of time. I find when I do exams I don’t write very well as I am so used to typing all the time. Do you have this issue? Also have you faced something similar in an exam? It did feel a bit like harassment but not sure if they were just to eager to do their jobs. What are your thoughts? Send in your comments. Why not continue the discussion on our twitter or facebook pages.

NAPLAN Starts for My Kids

HSC Score Does Not Define You

I Just Need a Theory