As you know the twins are in different classes for grade 1 and both seemed very happy with this when they left with their new classes, and from my last post you would know it was me that was the most seemed upset about this. I have been questioning why and I believe that I thought the girls would be more emotional by being apart than they were. In reality they were fine.

I was not opposed to separating the kids and believe that this will help in their development and confidence. However due to past behaviour and of course asking the kids what they wanted to do regarding school, I thought being together was the way to go. The girls both told me together and separately that they wished to be in the same class. So I thought that this would be the best way to go.

Last Thursday was the girls second day of school and one kid was very clingy and upset. She did not want me to leave. I stayed for a little bit and tried to remove myself from the classroom with little disruption to my girl and of course the classroom and teacher. My attempts did not work and she was hanging onto me very tightly and like her life depended on it. I was not sure if she was just a little sensitive that day or if she was missing her sister. She seemed okay to be in a class without her twin so I did not bring it up. I did not want to allow her to think that she cannot be in a classroom and develop by herself. 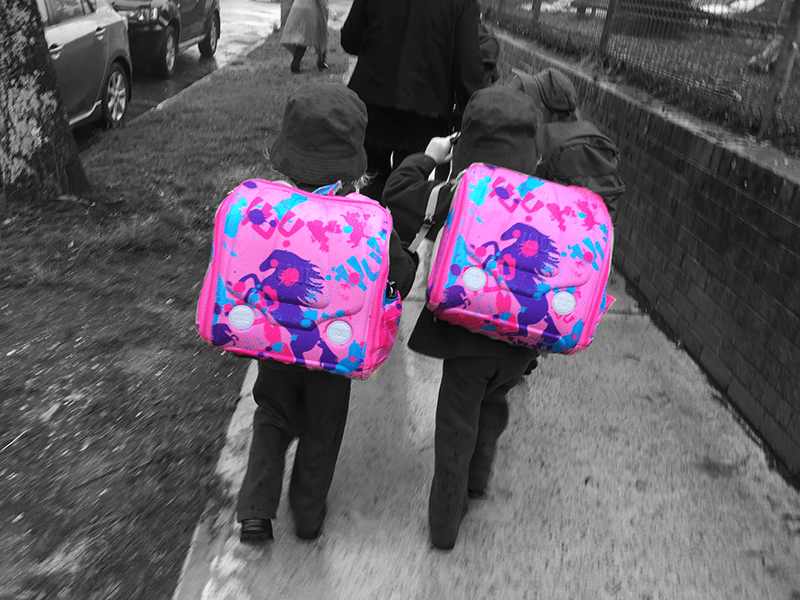 When I left the teachers aide said that she could be the class helper. She sat near the teacher and was promised to help. I thought this was great as this was my queue to exit the room and when I looked back she had a smile on her face. My little one does love helping and doing things for the teacher and others.

My other little girl, was busy with her work in her class and did not look bothered. I waved her goodbye and she gave me a wave and a smile. All good I thought.

The girls are in a composite class of kids who are grade 1 and grade 2 students. The teachers and students are all learning about each other and understanding what level each child is at for work and learning names and so on.

The kid who was clingy was very upset on Thursday night and told me that she was not allowed to help in the class, that the older kids got different work and that she was doing Kindy work and it was boring! She told me she wanted to learn everything and do more and that the teacher was not allowing her to look at the bigger kids worksheets.

I sat down and listened to what she was saying and explained the following:

I don’t know if I got a straight story about the day but I know the following things, she was upset, she was told she would help and then did not and could not show that she could do higher work like the grade 2’s.

Friday came and this was day 3 of the first week of school. I felt uneasy as I had to go and have a chat with one of my child’s teacher’s and it was only day 3 of the first week. I did not want to be seen as a problem parent or fussy mother, but I thought I should address some of the issues early on. If I left it and it got overlooked due to me not saying anything I would hate myself. I don’t want me not speaking up to be the reason that a child gets frustrated and does not try at school.

My immediate thought with the composite class was that they will learn so much. My fear now is that they will be stuck with grade 1 work even if they do well, above and beyond. I hope that they get exposed to more being in a class with grade 2 kids and with more things to learn.

I am worried it will be an impediment and they will get angry if they cannot learn more in this class (If they excel at grade 1 work that is; I would just be happy if they do well with what is offered in grade 1) Has this happened to you?

Our school is great and the teachers are amazing. I have done my part and mentioned how my little girl was feeling and what she is capable of. Let’s just see what happens in term 1. It is all new and a learning curve for the girls. Grade 1 is a big step compared to Kindy.

I must say that the start of grade 1 was more stressful for me than the start of Kindergarten. I was concerned about the kids being split up, the issue with one of the kids being worried and upset, and there is another issue; The school has had more enrollments and there will be another class of kids for grade 1. Gosh, will they split up the kids again?????

I had a word to the principal and mentioned that we are fine with the twins being in different classes, but thought that it might be a drama if they get moved again. I mentioned that if we can, can the kids stay where they are? I do understand if we have to move due to numbers and was told I will be consulted if this would happen (Not sure if it will happen but I have not received a phone call with any updates, so think all is well). I think due to the big change of different classes, and all different ways of doing things, moving kids again might not be a good idea. Have your kids been moved after settling into a classroom and a teacher?

Today is the start of week 2 for school and the kids have now been told of the new class for grade 1. Both kids are telling me they want to move to the new classroom…. oh the joys of grade 1 currently. I believe that it might take a while to adjust to the new way of doing things but all will be fine! It might take a good month to do this but it will happen.

How have your twins handled the start to school? Are they in Kindy, Grade 1 or another grade. Maybe in high school? Do they share a classroom or have they been separated for a while now. Let us know.

Having Two Kids Close in Age is Not Like Having Twins