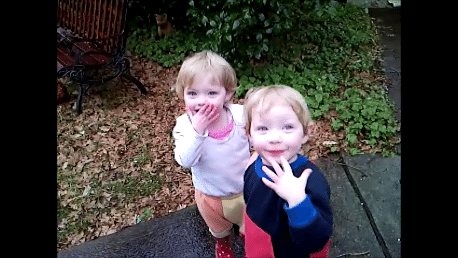 The girls experiencing snow for the first time

Today the girls were off to their swimming lesson. It was a saga to get both the girls organised and especially Julia in her swimmers. She kept on saying “I don’t want to go swimming, I want to stay home!” Oh well, I finally go her dressed in her swimmers and in some clothes and jacket, the same with Lillian. The wind was so loud and fast that it was very scary to hear it in the house, I was not looking forward to going outside at all, although I had to. I was happy that the lesson is only for 30mins and once inside it is nice and warm. Just the issue is
getting to and fro from the car.  To give you an idea of what the temperature was this morning here is the breakdown for temperature and wind speed :

The girls finished their lesson and wanted to go to the wading pool. They are so much more confident now as they went up to the water that sprays out and put their head under it. They were having a great time. After that we went home as it was just so cold. We all had lunch and off to bed went the girls for their day rest and my chance to do some things for me or housekeeping (oh the joys). As they are not sleeping well together during the day the girls are seperated, one in the porta cot and one in the bedroom, each child has a turn in the porta cot so it is not like a punishment. During my time out, Lillian who was in the lounge room was screaming and crying.  I went in to see what the problem was, I was then told that there was a monster. I cuddled her and told her that I will tell the monster to go away. She liked this idea. However it was not just Lilian who was not happy. Julia was crying and screaming as well. Maybe it was the scary wind.

Decided to get them both up and cuddle them and maybe we should watch a film and then get ready for dinner. However during the nappy change time, I realised it was snowing. Who knew, but it was so cold that I thought it might happen. Oh well, lets get dressed so that we can all go out and experience the snow, it was just flakes but it was coming down and managed to close the highway at Mt Victoria to Lithgow today – http://www.smh.com.au/environment/weather/everything-is-all-white-heavy-snow-falls–in-parts-of-nsw-20110621-1gd5j.html.

Also the other amazing thing that has happened today is that in the change room of the swimming pool, Julia told me that she did not want a nappy on. I tried to fight it at first and then decided to see if she was going to remain dry and clean. She did that until after lunch when we were at home. I took her out of her pants and put her in dora the explorer undies and she was great. A very clever little girl. Also at the pool she used the big toliet like last week and I was so impressed by how well she is doing. Today at home she has kept dry mostly and has used the potty about 4-5 times and done about 3 wees and tried to do a pooh but had an accident. Lilian this afternoon also insisted on having undies on as well and did a wee in the potty. So that is such great news. Nana (my mum) has purchased the girls an Elmo Chicken toy and when they do something amazing in the potty they get to play with it. So this afternoon it was Elmo Chicken, Dancing, Snow, Stickers and many cuddles and kisses to show that they are doing such a great job.

Maybe this is the start of no nappies??? I have always been told that the child will let you know. Maybe this is Julia saying I don’t want to wear a nappy anymore? I was so focused on trying to get them potty trained that it was not working, that I have just given up and done things in small stages. Currently they have been doing it when they want to, and Julia has been more interested than Lilian other than today. I was so amazed and taken a back that I did not know what to say. I suppose I just have to keep plodding along to see if this works and maybe by 3 years of age, the girls will be potty trained. Well I can hope, but with the warmer weather again, I was going to make a bigger effort again. Problem is that I don’t want to push to hard that it does not help the training effort, So I am very pleased about today and it all came from Julia and also Lillian.